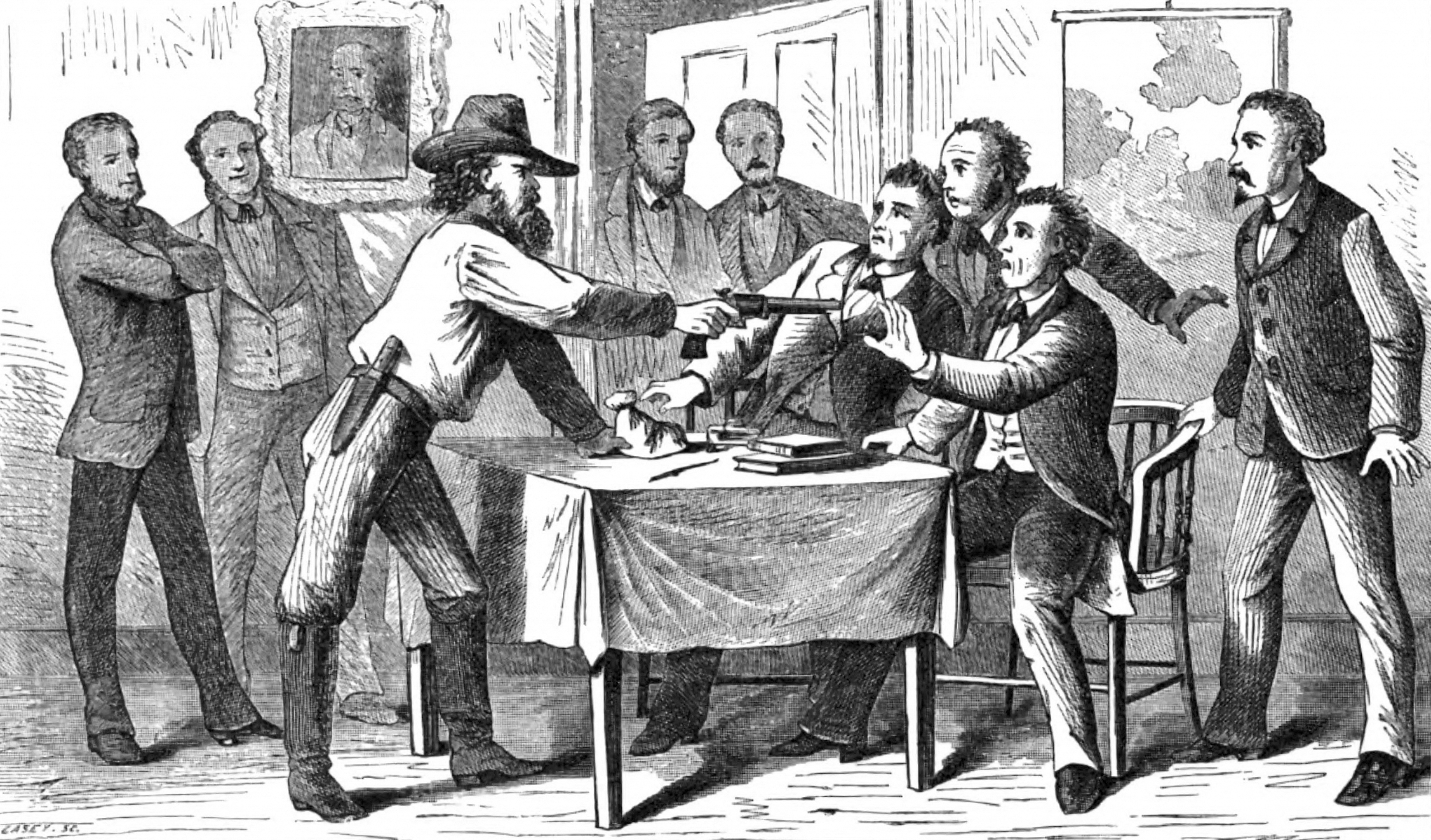 You may remember our discussion about the flawed arguments people make in defense of their favorite stories. After exhaustive research,* I’ve discovered that people do the same thing for roleplaying games. I understand this desire. I know my blood boils whenever someone bad-mouths Mouse Guard. Roleplaying games are extremely personal, perhaps the most personal of all media. We spend countless hours pouring over rules and constructing every last second of our characters’ backstories.

It’s no surprise that critiques of our favorite systems cut deep. And yet, that doesn’t mean those critiques aren’t valid. In our rush to defend what we love, we often hurl knee-jerk defenses that make no sense. The same ones pop up over and over again. Look upon them, so you do not fall victim to these fallacious arguments.

1. You Obviously Haven’t Played It

Yes, this one also appeared on the list about bad stories, but it’s just so common in roleplaying critiques. In fact, it seems to be standard. If someone writes a negative post about a game, the automatic response is to assume they didn’t play it even if the post includes examples from play. The logic goes that if the critic’s experience didn’t match yours, they must have made it up.

I’ve read many, many reviews where it sounds like the reviewer was playing an entirely different game than I was. But I never accuse them of fabricating their session. What’s the motivation to do that? Reviews for roleplaying games are about as niche as you can get, so it’s not as if they’re getting paid to pump out articles about systems they’ve never experienced.*

If it sounds like the critic interpreted a rule incorrectly, that’s a valid point to make, but it doesn’t mean they’ve never played the game. For example, let’s say you read a review complaining about how the fighter in Fifth Edition D&D has sixty hit points at level five. That’s clearly not true, and you might easily assume the reviewer has never actually played Fifth Edition. But far more likely is that they read the rule saying you always assume a maximum roll for hit points at level one. They then mistakenly assume that this applies at every level, not just the first. That’s why they’re complaining in their review that characters have way too many hit points.

They’ve played the game incorrectly, but they still played it. A mistake is far more likely than a reviewer brazenly lying to you. We just don’t have the motivation to do that. This argument is self defeating because if by some mischance a critic actually didn’t play the game in question, then their critiques should be incredibly easy to counter. You won’t have to accuse them of lying.

Since roleplaying games are games,* we have no reason to critique them. Why would anyone waste the keystrokes to analyze such innocent entertainment? They’re pure escapism, with no deeper meaning at all, or so some people would have you believe.

This defense comes up most often in relation to social justice critiques, but you can see it anywhere, and it’s always absurd. We all know roleplaying games are games; that’s why we care about them. Do you know how much of our time is spent playing games? We’re nerds; it’s what we do.

This defense is not only wrong but also insulting to every designer, GM, and player out there. It’s saying that our passion doesn’t matter because it’s only a distraction for children. I’ve spent too many years fighting for roleplaying games to be taken seriously to accept that.

No one who uses this defense actually thinks games aren’t important. If they did, they wouldn’t bother to come online and argue about them. They just don’t want to think critically about their chosen pastime.

3. It Works If You Have a Good Game Master

Look, I know you had a problem with the game telling you to roll dice that don’t exist, but if you just had a better GM, everything would be fine. In fact, your GM is probably terrible, which is the only reason you might have had problems with the game in question. Why do we even talk about systems, when GM skill is the only thing that matters?

Whenever someone critiques a game, people respond as if the system itself is unimportant. This is especially likely if the critic compares the system they didn’t like to one they did. They might talk about how much better Torchbearer is at dungeon crawls than D&D, only to be greeted by a fusillade of “D&D works fine if you have a good game master!”

As a GM myself, I find these people’s blind faith somewhat flattering, as if my abilities are so important they transcend all other factors. In reality, system choice matters a lot. While good GMs can overcome weaknesses in a system to run a fun campaign, they’ll be even better if they don’t have to.

Think of roleplaying games like shoes. Olympic athlete Usain Bolt will always be a fast runner, even if he’s wearing a ratty pair of cast-off sneakers. But he’d never show up to a race in those, because having good shoes will let him run even faster.

Good GMs will be even better when they’re supported by good systems. One reason I love Mouse Guard so much is that it does a lot of the mundane organizational work for me with its player-turn–GM-turn system. When running Mouse Guard, I can spend more of my time plotting devious weasel attacks and less worried about the basic organizational structure.

Some GMs get really good at running flawed systems and still prefer them even when better options are available. That’s fine. Retraining yourself in a new system is a big commitment that not everyone has time for. GMs should run what they enjoy. But that doesn’t make the flaws in their favorite system any less real.

4. Your Players Must Be Jerks

“This weapon/power combination is easily abused,” the critic says. “Only rude players would abuse it,” the internet says back. The theory here is that any problems with the system are actually the result of bad behavior on the player’s part. Clearly, the solution is to simply find better players. If you don’t know any better players, then tough luck I guess.

Problem players do exist, as do all manner of strategies to deal with them. However, that is usually a separate issue from problems within a system. The harsh truth is that even good players,* will fall into bad behaviors if the system encourages them enough.

Consider Mage: The Awakening. In that game, the rules for ritual magic are highly abusable. Players who wish to can acquire vast amounts of power, to the point where they tear apart even the best-constructed campaign. The only thing that stops this from happening is the players’ desire to not be jerks. But one day, PC Jamal fails a roll he really wanted to succeed. Irritated, he remembers that he could have succeeded if he’d just pushed the ritual rules a little harder. In that moment, his desire not to break the game is overcome by his desire not to fail rolls. It happens; we’re all human.

PC Mimi notices that Jamal is now more powerful than anyone else at the table. This bothers Mimi to the point that she decides to push the ritual rules a little harder too, just to keep up. PC Ashley notices that Mimi and Jamal are now both more powerful, and does the same thing. From there, the game spirals out of control, as every player reaches for more and more power.

Sometimes it’s a lot simpler. Players don’t always realize that what they’re doing is hurting the game. If the rules say they can do something, players generally assume it must be ok. If 95% of a system is devoted to combat, it’s hardly the players’ fault for assuming they should make characters who’re all about fighting, even if the GM wanted a story where the PCs are diplomats.

5. You Can Just House Rule It

This is the final fallback position of any reflexive game defender. Why complain about a rules issue when most games give the GM explicit permission to modify the system as they see fit? Clearly, only a terrible GM would see bad rules as a problem.

While I am a fervent advocate of changing a rule that doesn’t work for you, I also believe you shouldn’t have to. If you pay money for a game, it should work without a lot of extra effort on your part. If someone sold me a car with the rearview mirror falling off, no doubt I could fix it, but that doesn’t mean it didn’t have a problem to start with.

The best games are ones that require the least house ruling, because then you can focus your efforts on actually running the game. Plus, house ruling is never as simple as it sounds. It requires a high degree of system mastery if you don’t want it to create more problems down the road. Many GMs do not have the time to learn their game that well.

Here’s another example from my gaming table.* In Mouse Guard, the Attack action is too powerful. Savvy players quickly realize that if they want to win conflicts, they should simply choose Attack over and over again. To fix this, I assigned the Defend action a bonus when scripted against Attack. All seemed well, until I saw that shields already get a bonus to Defend. This hadn’t come up in game because very few mice use shields. But suddenly, shields were overpowered, and I had to go back to the drawing board.

That was a relatively benign example. They can be a lot worse, especially if the rule you’re changing is important to a PC. Spellcasters are overpowered in nearly every edition of D&D, but trying to fix them will earn you the ire of anyone who’s rolled up a wizard.

If someone complains about their system not working correctly, suggesting a house rule to fix the problem is fine. But telling them their complaints are invalid because of a theoretical solution you developed is a logical fallacy. If you follow that rabbit hole far enough, you’ll reach a place where GMs shouldn’t bother buying games at all, because they could just make something up.

Arguing over roleplaying games is about 60% of what roleplayers do. If you see a critique you disagree with, on this site or elsewhere, please chime in and say so. We all grow for the discussion. But avoid using arguments like those on this list. They don’t address the critic’s concerns, and the system you’re defending looks worse for it. We’re all nerds here, and we can create more solid defenses if we try!

I read the comments on some of my articles.
If anyone knows how to get paid for doing that, hook me up.
Who knew?
Yes, even yours. Even you, for that matter.
Ok, that’s a lie. I don’t actually use a table. Most of the time we just sit on couches.