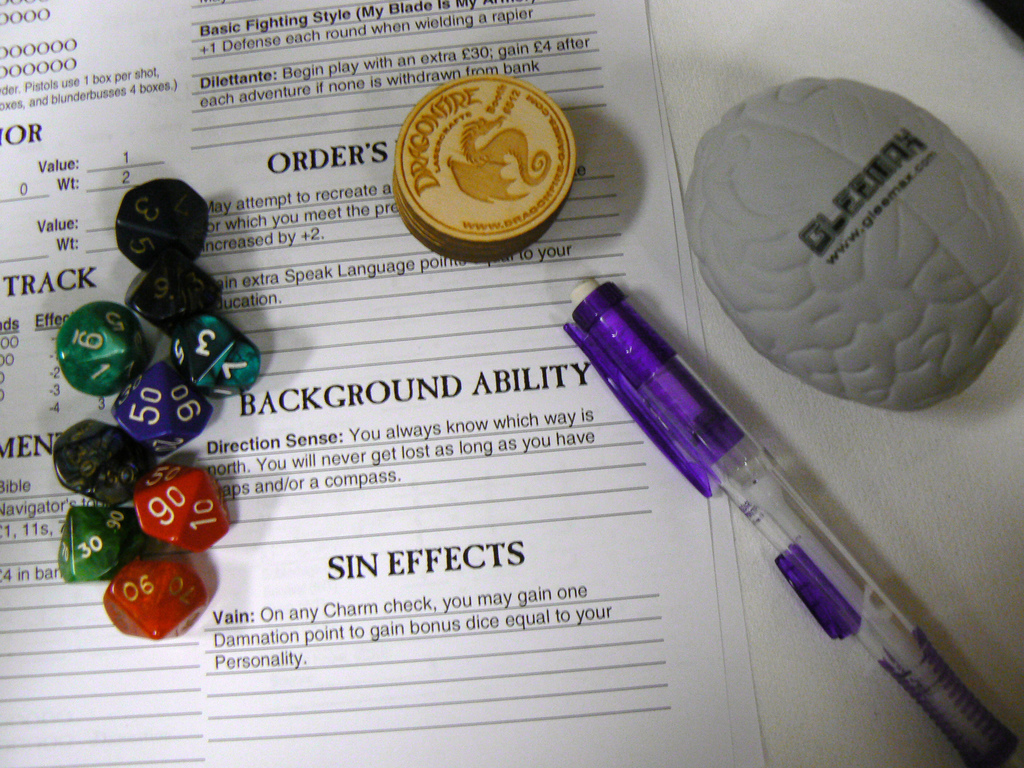 Image by Benny Mazur used under CC BY 2.0

Every time you build a new PC, it’s an opportunity to explore a new character’s story. But what if you draw a blank? It’s a struggle to be creative without context in an unknown campaign world, or to create a replacement character if your original dies. There are good methods for creating characters that focus on story elements, but if those aren’t working, you can also draw plenty of inspiration from the mechanics of the game you’re playing.

By examining choices you’ve made on the mechanistic side of character creation, you can come up with plenty of ideas for character history, personality, and values that you might otherwise miss.

Working Within the Game System

Sometimes the mechanics of a structured roleplaying system won’t readily support your initial ideas for a character background. While you can roleplay that your character has specialized knowledge or abilities gained from years of education, travel, or enslavement, there may not be options to express that back story in the system. If there are no rules supporting your barbarian’s extra monk abilities,* then the GM can’t easily validate that choice without affecting game balance.

This can become a sore point over the course of a campaign, because how the rest of the group views a PC is, more often than not, a result of what they accomplish in game. If what you’ve written for your character and what they are able to do become detached, then it can feel like you aren’t getting to play the character you created. In extreme cases players hijack entire adventures to showcase their character. That back story may be a great idea for a character, but if it doesn’t fit inside the rule structure, it might be best to use it somewhere else.

To avoid this, build the mechanics of your character first, then use the choices you make as inspiration for your character’s back story. After finishing your character sheet, look through it for ideas. Every skill choice and point distributed is a potential character detail.

A good way to drive your imagination is to mix and match characteristics across different archetypes. If the system you’re using has a character builder or compendium of supplemental sources, then it’ll be easy to find plenty of unusual combinations to try. It’s the same principle GMs use when making notable NPCs: the more unlikely the choice, the more a character stands out a from the crowd. Embrace the opportunity to write a character you’ve never thought of before.

A rogue is sneaky in a fight; they work with allies so they can attack with little personal risk. At least, that’s the rogue you get with a straightforward build. But what happens when you combine a rogue’s shadowy tactics with a bard’s battlefield control? This is the combo I used for my hobgoblin character, Toqoth.

With the tricks of a bard, Toqoth would isolate his enemy and keep control of their personal skirmish. This prevented his opponent from harassing the rest of the party. Then, when he eventually gained the advantage, he would use the devastating damage rogues are known for to finish off his prey.

The combination of rogue and bard characteristics gave me an idea as to how to roleplay him. Bards love to spin tales of great exploits, and rogues who rely on charisma are known for telling elaborate lies to advance their interests. Toqoth chose to spread exaggerated stories of his exploits as a bounty hunter to heralds across the kingdoms, generally failing to mention the help provided by his associates. Essentially, Toqoth was a yellow journalist, basking in fame while diverting attention away from the party members that preferred a measure of anonymity.

What Your Choices Say About a Character

Once you’ve made the major character choices like race, class, and abilities, there are still a plethora of details that need to be defined to make a well-rounded PC. Skills, feats, talents, and even equipment choices can give you opportunities to say more about a character. Once your character’s built and ready to play, look at these small choices and figure out what they say about your character’s personality, history, or values.

Of course, some choices indicate a typical background for that character’s role. Scouts are expected to be well trained in scouting after all, and any skills or traits that enhance that ability probably won’t be particularly noteworthy.

Each mechanical choice made during character creation should be approached as a roleplaying choice as well. If you’re creative with your build, then you should be able to create an interesting character whose actions in game match what you envision for their story.

That they gained during their childhood in a monastery, of course.