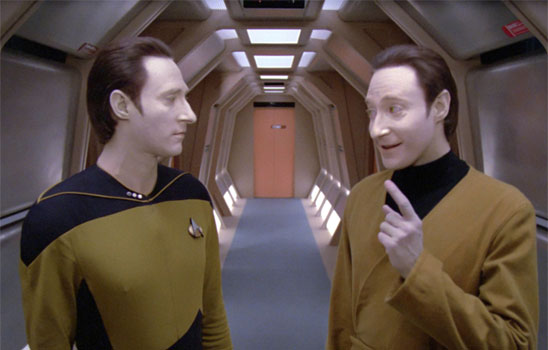 Lore can use contractions, but that's not all that separates him from Data.

One of the challenges of writing strong dialogue is making each character sound unique. Without different speaking styles, it’s hard for readers to tell who’s speaking, and conversations become lackluster.

Luckily, there’s a variety of options for distinguishing characters in dialogue. But here’s the important part – they are all features of the character in question. If you don’t know the temperaments, personalities, and motivations of the characters in your scene, work on that first. It will make writing dialogue for them much easier.

I’m going to take a snippet of dialogue and make the characters sound different from one another. This conversation is between Annie, a clerk at the foremost gate to Hell, and a visitor, Pete. Pete is trying to make a connection with a friend he thinks is in Hell. Annie has been putting in overtime, and is just trying to get her workload finished. Here’s my starting snippet:

“Excuse me, I need to contact someone in Hell.”

“Do you have the address?”

“I can do a personal lookup. May I see your driver’s license, please?”

“I have to record a license number for all lookups. There’s a DMV down the street.”

“That would take hours. Don’t you close in 45 minutes?”

“You can come back in tomorrow. We open at eight.”

“I need to talk to him today.”

“This is an emergency. They’re going to–” Pete choked up. “Please.”

Annie opened a drawer and took out a small black card. She slid it across the counter toward Pete. “She’s not with us. But I think she could help you.”

Right now, Annie and Pete sound very similar. Let’s look at how we can distinguish them from each other.

Writing your story in another world doesn’t get you off the hook for distinguishing your character dialogue by demographic. Every culture has variety within it – between the rich and poor, the young and old, and different regions or belief systems.

However, if your story isn’t in another world, be careful when distinguishing character dialogue by demographic. It’s easy to give in to stereotypes, and if you do, you could end up with bland or offensive characters. Characters that don’t fit into a stereotype are more interesting. Just make sure that if your 15-year-old talks like someone who’s in their sixties, there’s an explanation.

In this case, Annie and Pete live in an alternate Detroit. Pete is in his late seventies, and he was raised to behave like a gentlemen. Annie is young and urban. Annie’s voice is probably pretty similar to my starting voice, since I’m also young and urban, but Pete speaks a little different. To start, he’s going to say “Pardon me, Miss” instead of “Excuse me.” Pardon is old-fashioned, and people generally use “Miss” to address women significantly younger than themselves.

Characters that are well-read will have a larger vocabulary than those that are not. Educated characters are more likely to know technical terms or be familiar with things they haven’t encountered personally. On the flip side, your characters will probably be ignorant about some things. “Irregardless” is not a word, but your character might not know that.

In this case, Annie has a college degree in Business, which she is putting to waste as a clerk. Pete only graduated from high school before getting work as a carpenter many years ago, but he reads the paper every day and is no schmuck. However, their familiarity with their current situation is vastly different. Annie works at the entrance to Hell; she knows everything about it and about her job. Pete has only heard rumors.

Pete won’t know what a Sinner ID number is, so he’ll have to ask. Because he’s older, I’ll use the phrase, “What’s that now?” since it’s something my grandparents say. Pete also won’t know what term he should use to refer to Hell itself. Since he’s new to this, he might be nervous about saying that he wants to contact Hell out loud. So he’ll use the term “the other side” when referring to it.

People have a variety of conversational habits. Some are learned behaviors, but others simply reflect what comes naturally. Some scales to consider include:

Some people just say what comes to mind, while others will carefully plan out what they’re going to say in their head first. Generally, verbose people are also spontaneous; it’s hard to plan a lot of words ahead of time. That is, unless they say it often – then it will sound rehearsed.

Annie fields requests like Pete’s day in and day out, so she has canned responses at the ready. I’m going to give her a rehearsed line at the end, when she’s handing him the black card. Instead of the more natural sounding, “She’s not with the HGA,” she’ll spout a long disclaimer: “This is not an endorsement by the HGA. The Dark Seer is not affiliated with us in any manner, and we do not promote or condone her services.”

Pete is spontaneous and verbose. He also speaks in a very personal manner. He treats most people like a friendly neighbor, and he isn’t afraid to share personal details. Since he’s an older gentleman, he has a lifetime of personal details to share. I’ll use that to make him more verbose. For instance, instead of saying that going to the DMV will take hours, he’ll share additional history: “I know, I’ve been there. Twice, maybe three times. Doesn’t do any good; I don’t have my papers. Lost them in a flood down in Tennessee almost thirty years ago.”

Despite Pete’s friendly chatter, Annie will maintain a business-like distance. She’s trying to get her work done quickly, so she’ll keep her words efficient and terse throughout most of the conversation. “Do you have the Sinner ID?” will become just “Sinner ID?”

Pete’s had a rough and humbling life. But he’s found his faith again, and he puts his trust in other people. He’s going to show humility and trust when speaking to Annie. He’ll openly admit to his ignorance, offer her a library card in place of a license, and ask her to make an exception for him.

Annie has come to see visitors as an annoyance that takes precious time away from other work that needs doing. It’s made her impatient with them. I’ll have her interrupt Pete when he goes on too long, and she’ll snap at him once. However, he’ll finally invoke her sympathy once he chokes up, and she’ll become more personal as a result.

After considering all of those factors, here’s my revised dialogue:

“Pardon me, miss; I need to contact someone on the other side.”

“What is the ID number of the sinner you’d like to reach?”

“I can do a registry search. Driver’s license, please.”

“Haven’t had one of those since ’85. How about I show you my library card?”

“A license is required. There’s a DMV down the street.”

“I know, I’ve been there. Twice, maybe three times. Doesn’t do any good; I don’t have my papers, lost them in a flood down in-–“

“If you don’t have a license I can’t help you.”

“Violate an agreement with Hell?”

“I wouldn’t ask you to any other day; I really wouldn’t. But if I don’t get that code from Charles… they’re going to…” Pete choked up. “Please.”

Annie’s face softened. She opened a drawer and took out a small black card. She slid it across the counter toward Pete. “This is not an endorsement by the HGA. The Dark Seer is not affiliated with us in any manner, and we do not promote or condone her services.” She lowered her voice. “But personally, I think she could help.”

You don’t need to hit your audience over the head with the differences between your characters. Subtle changes throughout the conversation can create a substantial improvement in how your dialogue sounds.

Once you’re done distinguishing character voices, not only will your dialogue sound better, but your characters will come through much stronger. Your audience will get to know them faster, and become more invested in the outcome of your story.

Comments on Distinguishing Characters in Dialogue