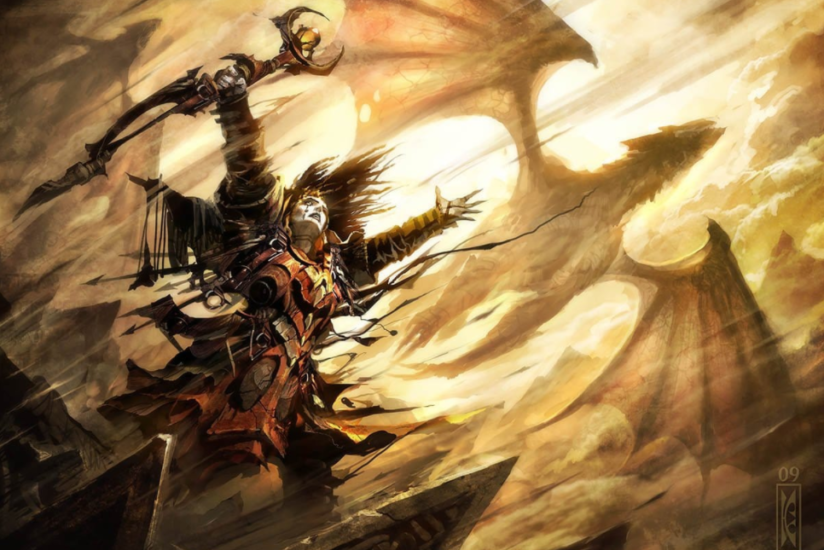 Wizards of the Coast has recently announced a slew of new D&D content, including new books, ancestries, classes, and the formal announcement of the game’s next edition.* Today, I want to look at the most immediately exciting of these, the Drakewarden ranger.

I have been very critical of the ranger class and the design decisions made around it, so much so I took the time to completely rebuild the class to have a more defined identity and competitive power level. Although previous additions to the class have helped, the ranger never felt up to par. However, the Drakewarden might have managed to change my mind.

The bond you share with your drake creates a connection to dragonkind, granting you understanding and empowering your presence. You gain the following benefits:

Thaumaturgy. You learn the thaumaturgy cantrip, which is a ranger spell for you.

A mostly flavor cantrip combined with a language is not a very powerful feature. Thankfully, it’s not alone.

As an action, you can magically summon the drake that is bound to you. It appears in an unoccupied space of your choice within 30 feet of you.

The drake is friendly to you and your companions, and it obeys your commands. See its game statistics in the accompanying Drake Companion stat block, which uses your proficiency bonus (PB) in several places. When you summon the drake, choose a damage type listed in its Draconic Essence trait. You can determine the cosmetic characteristics of the drake, such as its color, its scale texture, or any visible effect of its Draconic Essence; your choice has no effect on its game statistics.

The drake remains until it is reduced to 0 hit points, until you use this feature to summon the drake again, or until you die. Anything the drake was wearing or carrying is left behind when the drake vanishes. Once you summon the drake, you can’t do so again until you finish a long rest, unless you expend a spell slot of 1st level or higher to summon it.

This is easily my favorite pet feature in 5E so far. Companions are a core part of the ranger’s identity,* and I’m glad there is finally a ranger subclass that brings powerful mechanics to such an idea. What sets the Drake Companion apart from the pets of the Beast Master or Battle Smith is its layering of offensive features that allows for more power and flexibility.

To better explain this, let’s take a look at how ranger subclasses are built at 3rd level. They usually have one or two features that speak to the kind of ranger they are, followed by some flavor of “deal more damage per round.” The damage of such features ranges from 1d4 to 1d8, while the activation can be anything from a bonus action to free.

I’ve always said if a feature competes with Crossbow Expert or Polearm Master by offering an extra attack, it needs to match or surpass the feat-based competition. While the drake’s attack doesn’t meet this standard until higher levels, what’s great about this feature is that the passive portion continues to be useful even if the active portion is discarded in favor of some other bonus action.

Even if you never make attacks with the drake, it still serves as a passive damage boost, extra body and hit points on the battlefield, mount, and elemental resistance.

Level 7 – Bond of Fang and Scale

In addition, while your drake is summoned, you and the drake gain the following benefits:

Drake Mount. The drake grows to Medium size. Reflecting your special bond, you can use the drake as a mount even if your size is Medium. While you are riding your drake, it can’t use the flying speed of this feature.

Magic Fang. The drake’s Bite attack deals an extra 1d6 damage of the type chosen for the drake’s Draconic Essence.

Resistance. You gain resistance to the damage type chosen for the drake’s Draconic Essence.

This feature introduces some new mechanics, allowing for a medium-sized ranger to use their medium-sized drake as a mount while restricting the drake to ground-based movement to keep things balanced. While I applaud the effort on the designer’s part to restrict when players gain permanent flying, sadly they did not succeed. While the ranger cannot mount their drake and fly, there is nothing to stop the drake from grappling the ranger and lifting them into the air. Sure, its movement is reduced to twenty feet per round, but that’s a tradeoff I’ll happily take.

The other two portions are welcome buffs to the drake’s damage and the ranger’s defense. As a rule, fire resistance is the best selection, but given how a new element is selected every time the drake is summoned, it can be tailored to whatever situation the ranger finds themselves in.

As an action, you can exhale a 30-foot cone of damaging breath or cause your drake to exhale it. Choose acid, cold, fire, lightning, or poison damage. (Your choice does not have to match your drake’s Draconic Essence.) Each creature in the cone must make a Dexterity saving throw against your spell save DC, taking 8d6 damage on a failed save, or half as much damage on a successful one.

This damage increases to 10d6 when you reach 15th level in this class.

Once you use this feature, you can’t do so again until you finish a long rest, unless you expend a spell slot of 3rd level or higher to use it again.

While a cone-shaped Fireball gained six levels later than a full caster isn’t my favorite, this is the best area-damage option available to the ranger at such a level.* At 11th level, the ranger can use this feature up to four times per long rest, meaning it should be available whenever it is needed. This is my least favorite of the subclass’s features, but it still serves the useful purposes of shoring up the ranger’s normally awful area-damage capabilities.

Your bond to your drake reaches the pinnacle of its power. While your drake is summoned, you and the drake gain the following benefits:

Empowered Bite. The drake’s Bite attack deals an extra 1d6 damage of the type chosen for its Draconic Essence (for a total of 2d6 extra damage).

Large Drake. The drake grows to Large size. When you ride your drake, it is no longer prohibited from using the flying speed of Bond of Fang and Scale.

Reflexive Resistance. When either you or the drake takes damage while you’re within 30 feet of each other, you can use your reaction to give yourself or the drake resistance to that instance of damage.

Now our drake is hitting extra hard and no longer needs to “repurpose”
the grapple mechanics to serve as a flying mount. Alongside these damage and movement boosts, we get the 6th-level rogue Uncanny Dodge feature 9 levels later. As lackluster as that sounds, it’s still better than what many other ranger subclasses are getting. Horizon Walker and Gloom Stalker rangers gain something very similar to Reflexive Resistance as their entire 15th-level feature.

While I still like the ranger I made more,* the Drakewarden is an official ranger option that I would feel comfortable recommending to anyone. It has cool flavor and robust mechanics to match. With some quick reflavoring, this subclass can even serve as a replacement for the Beast Master. I don’t think I’d rank it as high as the top choices for fighter or paladin, but it’s a hell of a lot better than where the ranger was before.

Looking to be closer to 5.5 than 6E.
At least they should be.
Its main competition is the 3d8 Conjure Barrage spell.
Very unbiased.