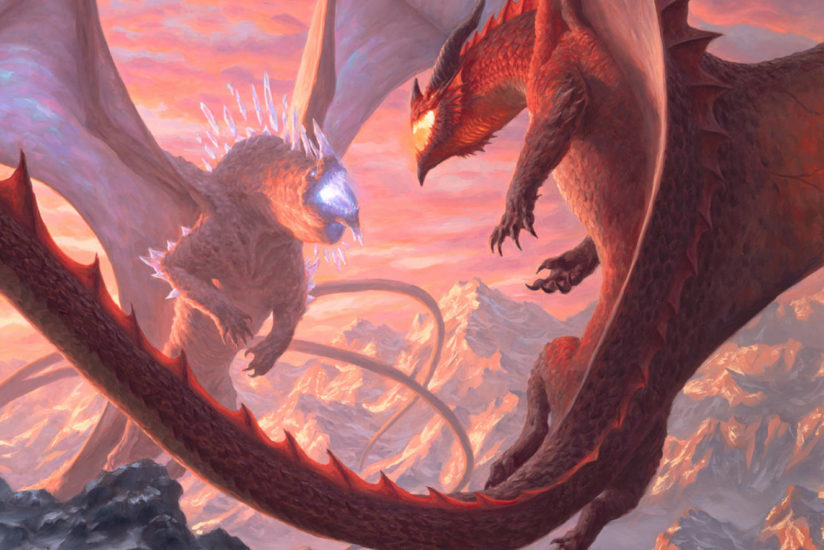 With the recent release of Fizban’s Treasury of Dragons, two new dragon-themed subclasses have been added to Dungeons and Dragons 5E. I’ve already covered the Drakewarden ranger, so now it’s time to look at the newest addition to the monk: the Ascendant Dragon.

The monk is a bit of an oddity in 5E. Much like the ranger, it is generally viewed as a weak class with some serious design issues. However, unlike the ranger, the designers seem either unaware of the problem or unwilling to fix the monk’s issues. While the ranger has been receiving steady power increases, including the Drakewarden, the monk continues to stagnate with little to recommend it outside of flavor. I would have loved to say this all changes with the Ascendant Dragon subclass, but that is simply not the case.

You gain the following benefits:

Draconic Presence. If you fail a Charisma (Intimidation) or Charisma (Persuasion) check, you can use your reaction to reroll the check, as you tap into the mighty presence of dragons. Once this feature turns a failure into a success, you can’t use it again until you finish a long rest.

Draconic Strike. When you damage a target with an unarmed strike, you can change the damage type to acid, cold, fire, lightning, or poison.

Persuasion and Intimidation are decent skills to have a once-per-rest reroll on; too bad they aren’t good monk skills. Monks have a lot of attributes they depend on, such as strength/dexterity, constitution, and wisdom. There is almost no way to add charisma to that list without heavily hampering the build in some other area.

As for changing the damage type of unarmed attacks, it’s a fine way to avoid non-magical bludgeoning damage resistance – until the base monk 6th-level feature that makes all unarmed attacks magical. Once that happens, Draconic Strike becomes almost completely useless, as magical bludgeoning damage is far better than any of the options presented in this feature. As for the additional language, it’s nice to have but grants no real mechanical bonuses to the subclass. Also, why does that feature start by saying you can learn Draconic when the rest of the text explains that you can actually learn any language?

Level 3 – Breath of the Dragon

When you take the Attack action on your turn, you can replace one of the attacks with an exhalation of draconic energy in either a 20-foot cone or a 30-foot line that is 5 feet wide (your choice). Choose a damage type: acid, cold, fire, lightning, or poison. Each creature in that area must make a Dexterity saving throw against your ki save DC, taking damage of the chosen type equal to two rolls of your Martial Arts die on a failed save, or half as much damage on a successful one.

At 11th level, the damage of this feature increases to three rolls of your Martial Arts die.

You can use this feature a number of times equal to your proficiency bonus, and you regain all expended uses when you finish a long rest. While you have no uses available, you can spend 2 ki points to use this feature again.

I have no idea how this feature turned out so weak when the Drakewarden ranger, the only other subclass in the book, has its own breath-weapon feature for comparison. The ranger feature, gained at 11th level, is dealing 8d6 to each target. At the same time, the monk is dealing a mighty 3d8 to a smaller area. Breath of the Dragon is less resource intensive per use, but it’s so weak that it doesn’t matter.

When you use your Step of the Wind, you can unfurl spectral draconic wings from your back that vanish at the end of your turn. While the wings exist, you have a flying speed equal to your walking speed.

You can use this feature a number of times equal to your proficiency bonus, and you regain all expended uses when you finish a long rest.

Flight is good; too bad this isn’t real flight. Instead the monk gets what is essentially a large jump that doesn’t have to tangle with 5E’s rarely used jump rules.* We know temporary flight is on the table at this level, as demonstrated by the Genie warlock. This feature isn’t even kind enough to have unlimited uses, as Step of the Wind costs a ki point to use and Wings Unfurled also has its own limitation on top of that.

As a bonus action, you can create an aura of draconic power that radiates 10 feet from you for 1 minute. For the duration, you gain one of the following effects of your choice:

Frightful Presence. When you create this aura, and as a bonus action on subsequent turns, you can choose a creature within the aura. The target must succeed on a Wisdom saving throw against your ki save DC or become frightened of you for 1 minute. The target can repeat the saving throw at the end of each of its turns, ending the effect on itself on a successful save.

Resistance. Choose a damage type when you activate this aura: acid, cold, fire, lightning, or poison. You and your allies within the aura have resistance to that damage.

There are two major issues with this feature, and the first is the activation cost of Frightful Presence. This portion of the ability is obviously modeled after the ability of the same name that many dragons have. However, the designers decided that unlike those dragons, the monk would need to burn their bonus action to first create the aura, then use their future bonus actions to select single targets to try and frighten. This is both slow and weak, especially when the monk has so many things they already want to be doing with their bonus action.

The second major issue is the size of the feature’s aura, especially when trying to use it defensively. Unless you know that the only area-of-effect damage the party will receive is of the type this aura is granting resistance to, huddling within ten feet of the monk is a great way to get blasted with something you are getting zero protection from. On top of all this, 3 ki points to reactivate the aura is very steep, meaning that even if the monk wants to use it, they’re giving up a lot to do so. This is the best feature this subclass gets, and that’s not a good thing.

You gain the following benefits:

Augment Breath. When you use your Breath of the Dragon, you can spend 1 ki point to augment its shape and power. The exhalation of draconic energy becomes either a 60-foot cone or a 90-foot line that is 5 feet wide (your choice), and each creature in that area takes damage equal to four rolls of your Martial Arts die on a failed save, or half as much damage on a successful one.

Blindsight. You gain blindsight out to 10 feet. Within that range, you can effectively see anything that isn’t behind total cover, even if you’re blinded or in darkness. Moreover, you can see an invisible creature within that range, unless the creature successfully hides from you.

Explosive Fury. When you activate your Aspect of the Wyrm, draconic fury explodes from you. Choose any number of creatures you can see in your aura. Each of those creatures must succeed on a Dexterity saving throw against your ki save DC or take 3d10 acid, cold, fire, lightning, or poison damage (your choice).

Taking these sub features one at a time, let’s start with Augment Breath. Now when the monk uses their incredibly weak Breath of the Dragon feature, which can cost up to 2 ki points, they can spend an additional ki point to expand the range and upgrade the awful damage to be slightly less awful. Dealing 4d10 damage is a little better than 3d10, but by level 17 it’s not nearly enough.*

Given that fighters, paladins, and rangers can get ten feet of blindsight at levels 1 or 2, and any character can gain it through a feat, receiving the same thing as part of a 17th-level feature continues the disappointing trend of this subclass. Finally, Explosive Fury adds a small bit of area damage to the activation of the monk’s 11th-level feature. This damage is not repeatable outside of expending 3 ki points to trigger the aura again, and much like Breath of the Dragon, it is far too weak for this level.

It is baffling to me that this version of the subclass is the one that made it to print. After glancing over the playtest version that was shown prior to Fizban’s release, almost every change made to the final product was a reduction in power. That version wasn’t even overpowered, and the result of such changes is this mess of a subclass.

I don’t know how the design process at Wizards of the Coast works, but at some point someone must have looked at this subclass side-by-side with the new dragon ancestries and Drakewarden ranger, then decided it was okay to release the new monk at this power level. The only explanation I have for this imbalance of power is that either the designers do not grasp how 5E classes stack up against each other, or someone with decision-making power has a personal dislike of the monk. I’m personally inclined toward the latter explanation, but either way the result is a new monk subclass of below average power, and that’s saying something given the competition.

The harengon wasn’t so lucky.
Still less than the Drakewarden’s 11th-level breath weapon.