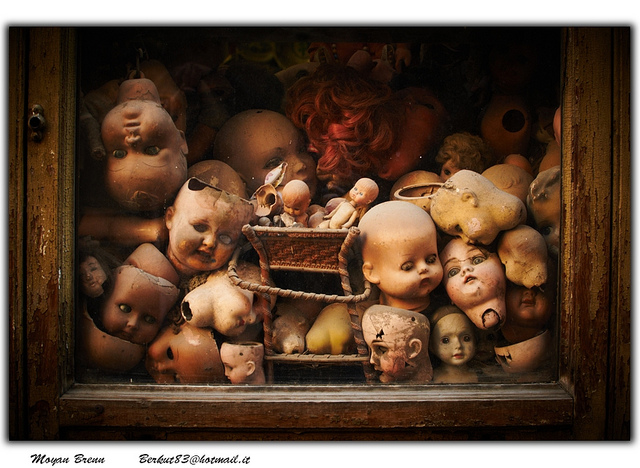 This is part 1 in the series: Mastering the Creeps

In film, it’s easy startle your audience. The soundtrack primes your subconscious with a feeling of dread, and then WHAM!, you’re hit with an unexpected sound or visual that makes you jump. Giving an audience the creeps…well, that takes a little more work, but film directors can still utilize sight and sound to give you that feeling in your bones that something is not right. What if, as a storyteller, you want to create an atmosphere that will creep out your audience? How do you make it happen without film’s advantages?

Why Do We Get So Creeped Out?

As explained by the wonderful YouTube channel Vsauce, the creeps are caused by our minds struggling to identify if something is safe or threatening. One part of our mind believes there is something wrong, something dangerous, and a typical fear reaction is triggered. At the same time, another part of our mind is identifying the thing in question as familiar and harmless. This second part is unable to understand why we’re feeling a fear response.

Stephen King describes this type of feeling as “terror” when defining what he considers to be the three main types of fear:

The Gross-out: the sight of a severed head tumbling down a flight of stairs, it’s when the lights go out and something green and slimy splatters against your arm.

The Horror: the unnatural, spiders the size of bears, the dead waking up and walking around, it’s when the lights go out and something with claws grabs you by the arm.

And the last and worse one: Terror, when you come home and notice everything you own had been taken away and replaced by an exact substitute. It’s when the lights go out and you feel something behind you, you hear it, you feel its breath against your ear, but when you turn around, there’s nothing there…

In terror, we perceive a threat exists, but cannot identify or confirm its existence. This cognitive dissonance causes a very powerful conflict within our subconscious. The attempt to resolve this feeling bleeds into our language — we understand that things which cause horror are “horrible” or “horrific.” But are things that cause terror “terrible,” or are they “terrific?” The ambiguity of a possible threat, not knowing if we are in danger and how something could harm us — these result in that all-too-familiar creepy feeling.

Falling into the Uncanny Valley

There are many objects or depictions that, whether by design or not, mimic humans. Something falls into The Uncanny Valley when it is close enough that it looks like it should be human, but there are aspects that are subtly wrong.

Movement, voice, coloring, or any of a hundred other small things can make something fall short of realism. Since our brain has already categorized it as human, these abnormalities get interpreted as a human afflicted by sickness, deformity, disability, or even death. We are programmed to be repulsed by people that are unhealthy so that we will avoid contagious diseases, and strong negative emotions and feelings of revulsion are triggered by these abnormalities.

We can extrapolate this to define a “Creepy Valley.” The Creepy Valley is for any thing or situation that has left behind the “peak” we define as dangerous, but can’t quite reach the peak of safety. There is no immediate need to flee, but we still don’t feel comfortable or secure.

Now Give Your Audience the Creeps!

So the creeps will come from things that fill your audience with unease. Go too far and you hit “gross-out” or “horror.” But the feeling of unease that the Creepy Valley gives us is cumulative, so you can afford to be subtle in your storytelling. Successful creeps are built into the narrative through countless small instances of things that don’t feel quite right. For example:

When things you’re surrounded by stop behaving predictably, pattern matching between threat and non-threat breaks down. You lose faith that your senses can warn you of danger, and it becomes more and more difficult to resolve the conflicts within your own mind.

It takes more effort than throwing in a classic horror soundtrack, but you can prime your audience by sprinkling these Creepy Valley elements throughout your narrative. Your story stops fitting in easily with the normal everyday world, which creates uncertainty- and gives your audience the creeps.

Comments on Creeping Out Your Audience