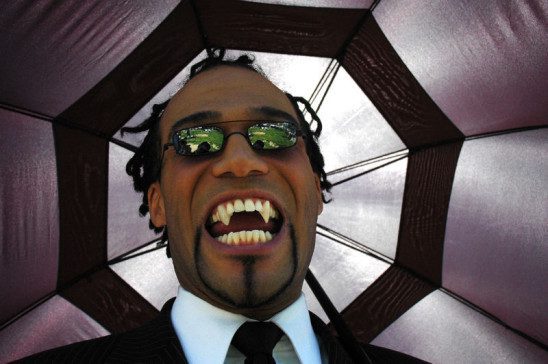 Living in spooky castles or just next door, vampires provide excellent antagonists for speculative fiction. They’re humanity’s predatory reflection, something that looks like us and yet isn’t. Unfortunately, they’re also overplayed. Vampires are so common in fiction that the novelty has worn off. Even when well written, they have difficulty wowing us the way Dracula and Nosferatu did.

Fortunately, this doesn’t mean you can’t use vampires as the big bad any more. Just be conscious of what makes them interesting and what’s done out of habit. Vampires still make good villains, but you’ll need to be at the top of your fictional game. First off…

TV shows like Buffy the Vampire Slayer and roleplaying settings like Vampire: The Masquerade have popularized worlds filled with vampires. There are so many blood suckers in these worlds that they have their own society, with leaders and governing structures.*

Throw this out the window. Unless you’re writing a vampiric political drama, you want as few of them as possible. The inverse ninja law also applies to vampires: the more there are, the easier they are to take down. This will happen even if you don’t want it to, because there isn’t any way around it. If every vampire is super powerful, and there are lots of them, then your characters won’t be able to win.

When characters dispatch mook vampires, the threat is diminished. Even if you’re saving a boss vampire for the climax, it won’t seem as scary because your characters have already defeated so many of its fellows. This is especially true in roleplaying games, where the characters themselves can get bored, but it occurs in prose too.

Instead, vampires should act like big cats. One won’t tolerate another in its territory, and seeing them together is rare. They should also be very choosy about who they turn. Anyone they make into a vampire will be around forever, and they won’t let some riff raff sully the bloodline.

Having fewer vampires also solves a believability problem. It’s not plausible that human society could fail to notice thousands of undead immortals populating the night, each one leaving a trail of bodies. But if there were only a dozen in the entire United States, that could fly under the radar.

But if there are so few and they don’t work together, how can they provide effective opposition? Well…

Give the Vampire Money and Influence

Instead of waiting out the day in a crumbling tomb, your vampire should be the billionaire owner of a software giant. They might be a popular politician, church leader, or anyone else who can yank on the levers of power.

If there are few vampires in the world, and each one has been alive for some time, then they’ve had plenty of time to cloak themselves in wealth. In the modern age, they can spend that wealth on dirty cops, spy drones, and private military companies. In a city, your vampire has the mayor’s ear. In a rural setting, they control the only reliable internet access.

When your vampire rests on a web of power, characters can spend the rising action dealing with minions. Some of these will be thralls, supernaturally enslaved to the vampire’s will. Others will be unwitting humans, still dangerous and morally compromising to kill. Are your characters going to open fire on a National Guard patrol, who think they’re raiding a drug cartel safehouse?*

Using your vampire as a mastermind means you can save their supernatural qualities until they’ll have the greatest impact. For most of the story, the characters will fight thralls who might be a bit more than human but nothing too extraordinary. Only in the climax do they meet a creature so fast their eyes can’t keep track of it. That has a lot more punch than staking an endless parade of low level vamps.

Vampiric masterminds also play well into the most basic theme of vampires as our dark reflection. Instead of a medieval castle in the middle of nowhere, the beasts are positioned at the heart of human society, where they can do the most damage. We all know of humans who abused their power to cause great harm; now imagine what a blood sucking monster would do in their place.

If you want to get mean,* the vampire can use their influence to deprive the characters of what they take for granted. Did the protagonist free a basement full of prisoners that were meant to be a snack? Now the IRS is auditing their household. This mundane retribution can be used to…

As Night’s Black Agents shows us, vampires make perfect antagonists in spy-thriller stories. A key feature of such tales is paranoia. Whose side is a double agent on? Are they really giving you important intel or just setting you up to be captured by the KGB?

Adding vampires only increases the paranoia, because they have the supernatural ability to influence a character’s mind. Whether through direct psychic manipulation or a twisted blood bond, many vampires possess some kind of mind control.

This introduces an X-Files conspiracy feel to your story, which makes the vampire even scarier. If a character is ever gone from the group, it’ll raise suspicions. Where were they? Did the vampire turn them against us? Why do they need to know so much about our plan of attack?

In a roleplaying game, you can make the players doubt a trusted NPC. In a prose work, one of the main characters can fall under suspicion. Emotional drama runs rampant as two close friends accuse each other of working for the foe. The drama can be internal as well. If you’re being controlled by a vampire, how can you tell? Characters will critically analyze their past actions, constantly second guessing themselves as they search for signs of vampiric influence.

As a side effect, paranoia helps explain why there aren’t well organized responses to the vampire threat. Anything bigger than a half dozen hunters plotting in their basement falls apart because it’s too vulnerable to infiltration. If your vampires don’t have mind control powers, you should add some right away in order to…

Mix Up the Power, Feeding, and Weakness Tropes

Vampiric tropes are almost universally known these days, which is why they’re such a snooze fest. Vamps are allergic to wood, they feed by sucking blood out through the neck, etc. There’s value in recognizability, but these are so well known they cross into cliche. That’s why you’ve got to mix things up.

I don’t mean reinvent the undead wheel. Your vampires should still be recognizable as such but with relevant details altered. Who says vampires always need to drink blood? They could drain emotional energy until their victims are comatose vegetables. Perhaps there’s an organ they must devour, or maybe spinal fluid is what satiates their craving.

For powers, the sky’s the limit. If vampires are rare, you can make each one stupendously powerful. Super strength and speed are good as a baseline, but take it further. We’ve covered the value of mind control powers, so fit some of those in there. Alien style acid blood, why not? Fingernails that turn into razor blades, sounds good.

The powers you give your vampire are dependant on the story you want to tell. If it’s a globe trotting tale of high espionage, the ability to change face and voice will be excellent to confound your protagonists. In a smaller scale game, where the vampire is kingpin of a local cartel, make them more brutal. Pulling iron directly out of a victim’s bloodstream should do it. When the vampire works through minions, allow them to pass along some of their power directly to thralls. That lets you get some supernatural baddies into the story before introducing the big boss.

Weaknesses require more thought. They provide a built-in turning point, as your characters turn the tide by finding something that actually hurts the undead. But you must be careful not to make the weakness too accessible, or you lose a credible threat. Fire, for example, is a terrible weakness. Any group of PCs can tell you just how many ways there are to inflict fire on an enemy. Prose work has the same problem, as attentive readers wonder why the protagonists don’t just mix up a molotov cocktail. Making the weakness too obscure creates the opposite problem. A weakness to the 10,000th grain of rice in a bag isn’t really a weakness, and it won’t help your characters overcome the monster.

Whichever ones you choose, make the feeding, powers, and weaknesses related. That way, they won’t feel like a collection of arbitrarily assigned traits.* If the vampires must feed on spinal fluid in order to survive, then a strike to the back of the neck might be what takes them down. Vampires who are weak to iron could have the power to corrode other kinds of metal.

Changing the traits plays directly against the audience’s expectations, and it can play against the character’s expectations as well. When they hear tell of a vampire, they’ll break out the stakes and holy water, expecting to be safe in the daytime until…

Let Your Vampire Walk in the Sun

Vampires should be creatures of darkness. It plays into their fear factor. They are at home in an environment where humans are badly disadvantaged. A vampire with no aversion to sunlight is too similar to countless other monsters. However, that weakness shouldn’t be absolute.

If your vampire immolates upon contact with sunlight, it makes daytime safe. Even with thralls and minions, the characters know the vampire itself can never come after them from dawn to dusk. Beyond diminishing the threat, it’s too big an advantage. If the protagonists ever find out where the vampire sleeps, it’s a simple matter to let the sun in. Try running that scenario in a roleplaying game. The PCs will show you how it’s done, no matter how secure the hideout.

Your vampire still needs a reason to avoid sunlight whenever possible, but not something that automatically defeats it. Sunlight might ignite its blood on contact, turning any open wound into a deadly inferno. Or perhaps sunlight destroys their magical disguise, revealing their true nature. Just avoid sparkles, and you’ll be fine.

Your characters don’t have to know. The vampire is content to go on letting them think sunlight is lethal to it. Imagine: the protagonists are fleeing up towards daylight, convinced they’ll be safe if only they can make it outside. They reach the doors and stumble out into high noon. They’re safe; the beast is contained. They all sigh in relief, until the vampire takes its first step into the light. The scene writes itself.

Countless more options are out there for enterprising storytellers. Vampires aren’t real, so you can make whatever changes you like! What’s important is that your audience gets something they weren’t expecting. That’s key in any story, but it’s extra work with vampires because of their high exposure. Draw outside the lines a little, and your blood sucking baddie will be ready to go in no time!

No word yet on vampiric lobbyists, but I suppose that’s redundant.
If they’re PCs, the answer is obviously yes.
And you do.
That’s what they are, but we must keep up the illusion.