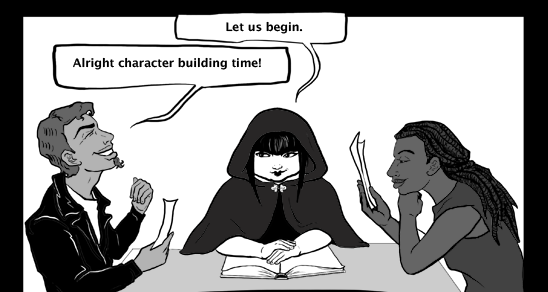 The characters appear in-game. Farid’s is a bespectacled man wearing tweed; Tash’s is a woman in a long coat holding a tommy gun.

Farid: Enter the Professor, a bookish type who knows all. He’s not much use in a fight, but no one can match his intellect.

Tash: The Hitwoman doesn’t go in for all that secret lore nonsense. She prefers to let her Tommy Gun do the talking.

Out of the game, Emma laughs maniacally.

Emma: Muhahaha! You think this is a kind of pleasant fantasy land where you get to choose what you become? Foolish mortals, there are no kind gods here! Roll the dice!

Tash: Oh, we have to roll our stats.

Tash: Looks like I go in for the secret lore nonsense way more than I originally planned.

The new characters appear. Farid’s is the same bespectacled man, hoisting books in each arm, muscles bursting from ripped-off sleeves. Tash is now a hunched, elderly woman with a cane and her tommy gun.

Tash: I am the murderous grandmother. Enemies lose sanity just by shooting at me.

At the table, Emma holds up the two flaming character sheets.

Comments on You Are What You Roll