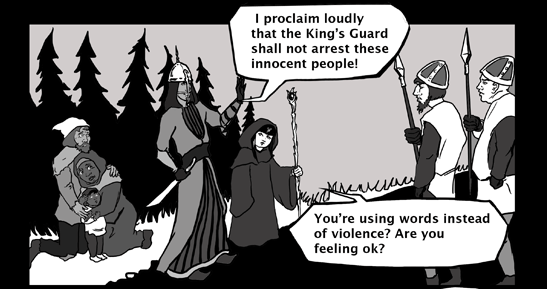 In the game, Emma and Farid’s characters stand between a huddled family and several angry-looking guards.

Farid: I proclaim loudly that the King’s Guard shall not arrest these innocent people!

Emma: You’re using words instead of violence? Are you feeling ok?

Tash, at the table, passes papers to Farid and Emma.

Tash: Sounds like a Duel of Wits to me.

Emma: There are a lot of options. “Point,” “Rebuttal,” “Dismiss,” this is way more detail than most games have. What’s “Obfuscate?”

Tash: You throw your opponent off by talking about something completely unrelated to the argument.

Tash: …You scripted nothing but Obfuscates.

In the game, Farid’s character talks to the guards. Emma’s PC holds her head.

Farid: You can’t take these people because their clothes are made of wool, and that would mean a wool shortage. Your orders have terrible penmanship, you should throw them out! You wouldn’t even be here if your parents had stayed single. Think about that!

Emma [out of game]: Is that an effective tactic? At all?

Tash: The King’s Guard has chosen to escalate to violence.