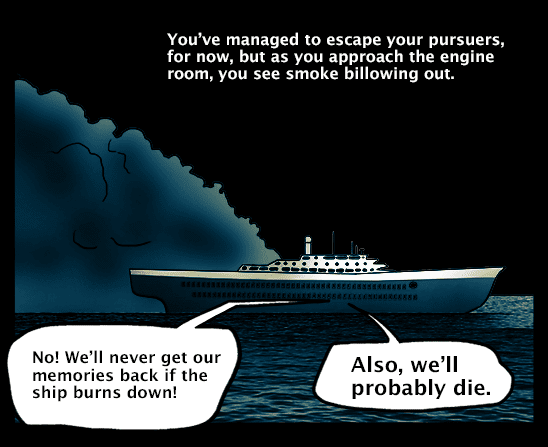 In the game, smoke pours out of the ship’s engine room. Tash speaks in a voice over.

Tash: You’ve managed to escape your pursuers, for now, but as you approach the engine room, you see smoke billowing out.

Farid: No! We’ll never get our memories back if the ship burns down! Also, we’ll probably die.

Emma grabs a fire extinguisher and tries to put out the blaze.

Tash: You try a fire extinguisher but the blaze is too large.

Farid: I found a fire hose, let’s try that!

At the table, Farid gathers his dice.

Tash: Roll five dice for your Athlete and Strength.

All of Farid’s dice come up ones.

In the game, Faird has flooded the engine room.

Farid: Well, at least the fire is out.

Emma: Can a ship even burn down?