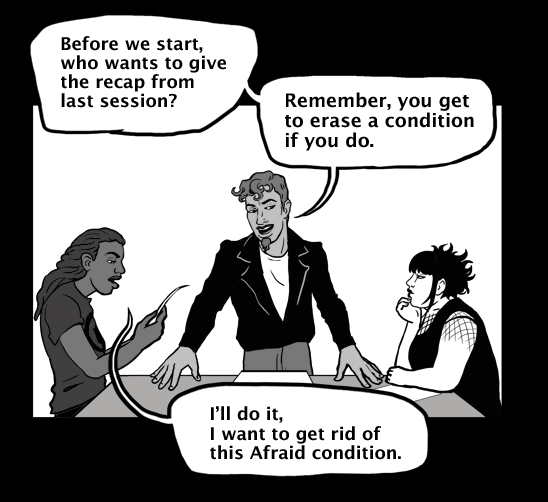 At the table, Farid is explaining the rules while Tash looks at her character sheet.

Farid: Before we start, who wants to give the recap from last session? Remember, you get to erase a condition if you do.

Tash: I’ll do it. I want to get rid of this Afraid condition.

In the game, Emma and Tash make camp in a creepy ruin. Tash speaks in a voice over.

Tash: There we were, deep in the lost ruins of Kur-Zankal. We went to sleep by a spring thinking we were safe, that nothing could get us.

Tentacles rise up out of the pool and reach for Tash and Emma’s heads.

Tash: We didn’t realize there were things in the lake, eldritch creatures that hungered for our minds as well as our flesh.

Tash and Emma flee in panic as the tentacles grab for them.

Tash: We escaped, barely, but the devouring songs of those lost old ones still haunt our sleep.

At a different camp, Tash looks refreshed and rested, but Emma looks terrified.

Tash: There, I feel much better.

Emma: You may have gotten rid of Afraid, but I think I just gained it.

Comments on The Pros of a Prologue