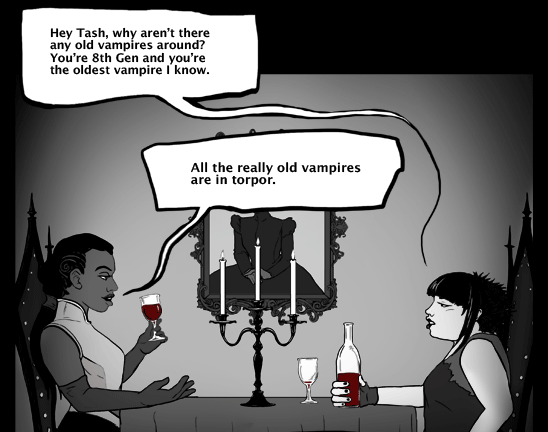 In the game, Tash and Emma enjoy a nice glass or two of blood at Tash’s table.

Emma: Hey Tash, why aren’t there any old vampires around? You’re 8th Gen and you’re the oldest vampire I know.

Tash: All the really old vampires are in torpor.

An ancient vampire holds its hands over a globe, imagining its web of power. Tash narrates.

Tash: For centuries the ancient methuselahs ruled the word with their plots and schemes.

The ancient vampire climes into a coffin as Tash continues to narrate.

Tash: But in time, the risk of younger vampires deposing them was too high, so they retreated into a long sleep, leaving minions to carry out their designs.

Back at the table, Emma looks skeptical.

Emma: Wait, they were worried younger vampires would kill them, so they responded by going into a helpless state where they couldn’t defend themselves? Are you sure they didn’t just want a nap?

Tash: Ruling the world through plots and schemes does get tiring.