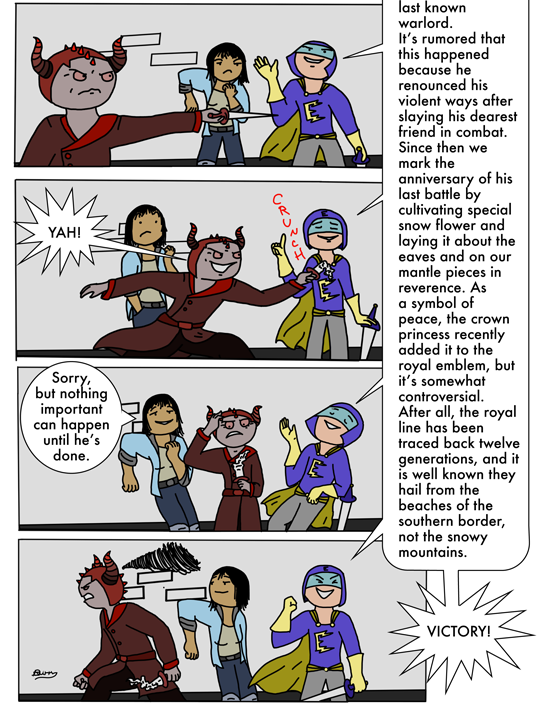 Exposition Man, his sidekick, and the villain face off in front of a wall. The villain levels a sword at our hero.

Villain: I have LONG waited for this moment, EXPOSITION MAN!

Exposition Man: As have I, especially since this is a peaceful society with very few duels or fights of any kind. In fact, the last known fight to take place…

The villain frowns, clearly impatient. The sidekick is examining her fingernails.

Exposition Man: …was after the disappearance of the last known warlord. It’s rumored that this happened because…

The villain leaps forward and stabs Exposition Man, surprising the sidekick, who’s leaned back against the wall. The sword crunches like a crushed can, and our hero is unaffected.

Exposition Man: …he renounced his violent ways after slaying his dearest friend in combat. Since then, we mark the anniversary of his last battle by cultivating a special snow flower…

The villain stares at his busted sword in disbelief. The sidekick grins satisfactorily, still examining her nails.

Sidekick: Sorry, but nothing important can happen until he’s done.

Exposition Man: …and laying it about the eaves and on our mantelpieces in reverence. As a symbol of peace, the crown princess recently added it to the royal emblem, but it’s somewhat controversial. After all, the royal line has been traced back twelve generations, and it is well known they hail from the beaches of the southern border, not the snowy mountains.

The villain storms away in a huff.

Comments on The Adventures of Exposition Man