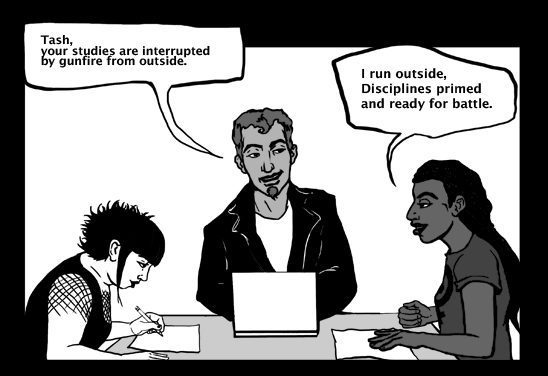 At the table, Farid is describing the scene to Tash, who is ready to face danger.

Farid: Tash, your studies are interrupted by gunfire from outside.

Tash: I run outside, Disciplines primed and ready for battle.

In the game, Tash meets Emma, who is dual wielding a pair of pistols. Tash looks exasperated.

Tash: That cannot be a real thing.

At the table, Emma has the book open to show Tash the page where it describes pistol tag. Tash looks nonplussed.

Emma: It is, see? Right here. Guns only do bashing damage to vampires anyway.

In the game, Tash reaches out to take one of Emma’s pistols. Tash looks very disapproving. Emma looks dejected and offers the pistol to Tash.

Emma: Are you mad?

Tash: Emma, I have only one thing to say to you.