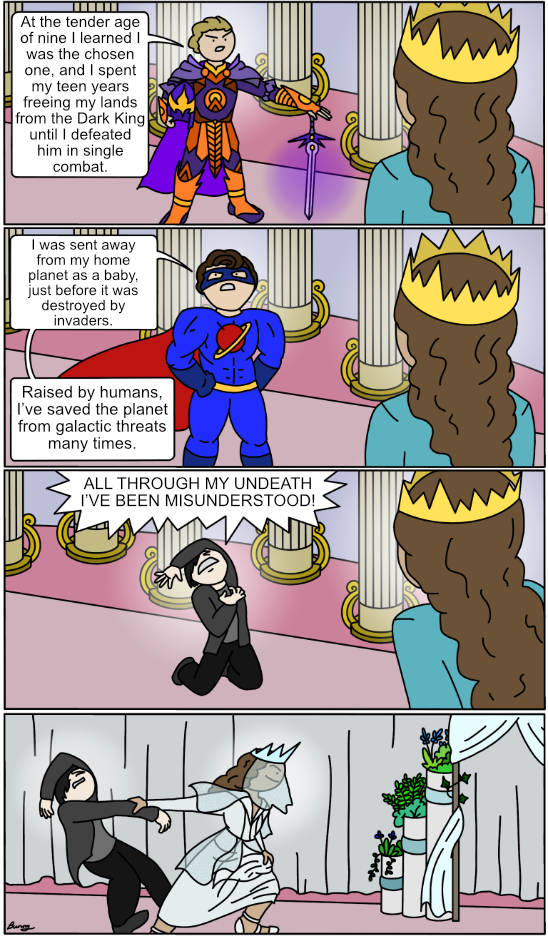 A queen sits in her throne. Next to her, the herald is making an announcement.

Herald: Her majesty shall marry the suitor with the most compelling story.

Suitor 1 is before the throne. He is wearing fancy armor and has a glowing sword.

Suitor 1: At the tender age of nine I learned I was the chosen one, and I spent my teen years freeing my lands from the Dark King until I defeated him in single combat.

Suitor 2 is before the throne. He is wearing spandex, revealing all his muscles.

Suitor 2: I was sent away from my home planet as a baby, just before it was completely destroyed by invaders. Raised by humans, I’ve saved the planet from galactic threats countless times.

Suitor 3 is before the throne. He has black hair, pale skin, sharp cheekbones, and has a super melodramatic, angsty pose.

Suitor 3: ALL THROUGH MY UNDEATH I’VE BEEN MISUNDERSTOOD!

The queen is smiling in her wedding dress as she drags Suitor 3 toward the altar. He is facing backwards and still striking an angsty pose.