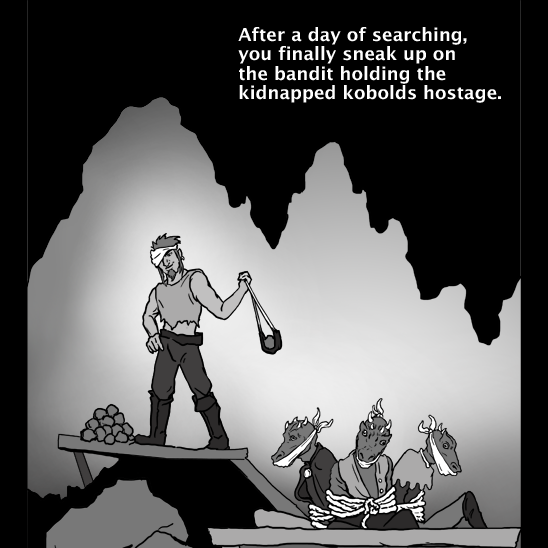 In the game, Emma and Tash come upon a sling-wielding bandit guarding a group of kobolds. Farid speaks in a voice over.

Farid: After a day of searching, you finally sneak up on the bandit holding the kidnapped kobolds hostage.

Tash: He’s got a sling, and there’s no cover. I can get him, but he’ll probably hit me too.

At the table, Tash raises her dice while Emma looks through the book.

Emma: Maybe not. The rules say that when you attack someone with a bow, it’s a versus action, so you’d cancel out each other’s successes.

Tash: But… I have a bow, and he has a sling. How could we be blocking each other?

Emma: Just go with it.

In the game, an annoyed Tash looses arrows that collide with the bandit’s sling stones in mid air while Emma goes to free the kobolds.