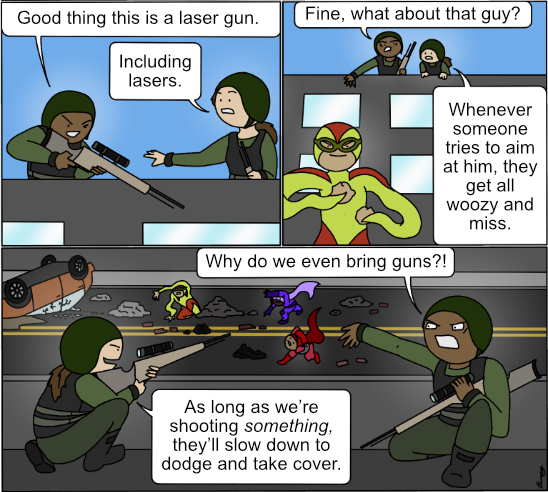 Two minions with guns sit on a rooftop, looking at three superheroes. Minion 1 is aiming at a flying hero.

Minion 1 is looking at a hero lifting a car over their head.

Minion 2: Actually, their invincible chest plate is a magnet for projectiles.

Minion 1: Good thing this is a laser gun.

Minion 1 is growing frustrated. They gesture to a third hero below, whose limbs are long and stretchy.

Minion 1: Fine, what about that guy?

Minion 2: Whenever someone tries to aim at him, they get all woozy and miss.

In the background, two of the heroes are running low to the ground while the third crouches behind cover that is clearly too small.

Minion 1: Why do we even bring guns?!

Minion 2: As long as we’re shooting something, they’ll slow down to dodge and take cover.