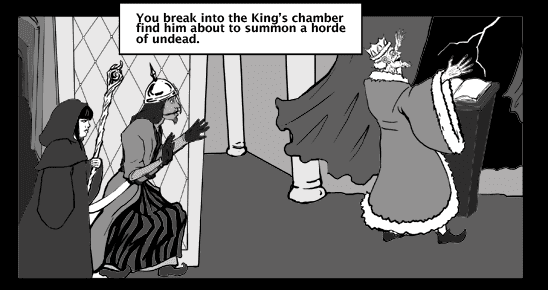 In the game, the PCs come upon the king laughing maniacally behind an altar as lightning flashes beyond the window.

Tash: You break into the King’s chamber and find him about to summon a horde of undead.

Out of game, Farid looks at his character sheet in distress.

Emma: What? The King’s a bazillion years old. We can take him easily.

Farid: Not that, my character’s Beliefs! One says that “Evil Must be Defeated,” and the King is evil, but another says “I Must Save the Kingdom,” and if we expose the King, the Kingdom will fall apart!

Tash: Just play out the conflict, that’s what Beliefs are all about.

In the game, Farid’s character has a crisis of identity.

Farid: Your Majesty, you’re under arrest! But no! I must protect you to protect the Kingdom! But you are evil and I must defeat the evil… but the kingdom…

Emma’s character steps forward and fries the king with a spell.

The other two stare at her.

Emma: What? It’s not against my beliefs.