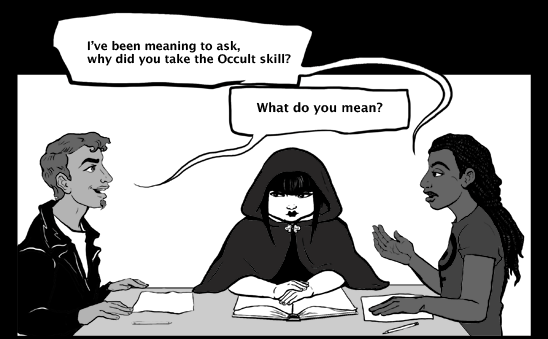 Tash: I’ve been meaning to ask, why did you take the Occult skill?

Farid: What do you mean?

Tash: Occult is specifically for non-Mythos supernatural phenomenon, which don’t exist in Call of Cthulhu. Why do you need a skill to know about fake magic? Isn’t it useless?

Emma: Weren’t you in the middle of something?

In the game, Farid and Tash’s characters are interrogating a wolfman.

Farid: Right! My skill is hardly useless, Tash. For example, I can tell you that this is certainly not a werewolf.

He pulls off the werewolf’s head to reveal a slimy creature beneath.

Comments on And I’d Have Gotten Away With It Too!