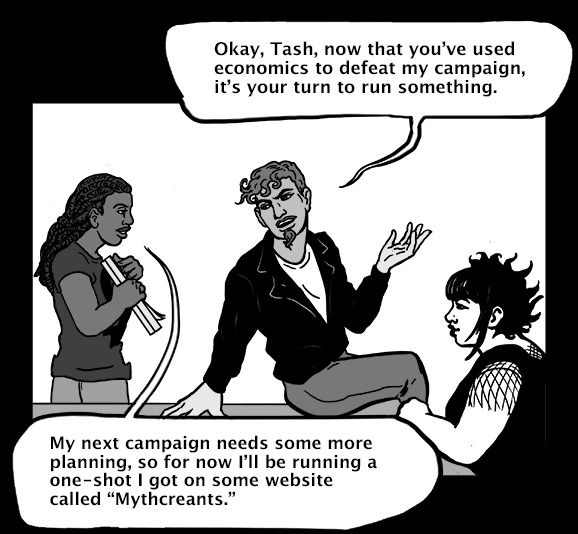 At the table, Tash, Farid, and Emma are deciding what to do for their next game.

Farid: Okay, Tash, now that you’ve used economics to defeat my campaign, it’s your turn to run something.

Tash: My next campaign needs some more planning, so for now I’ll be running a one-shot I got on some website called “Mythcreants.”

Tash shows Emma and Tash the Voyage cover page on her laptop.

Tash: Take your character sheets and find out.

In the game, Farid and Emma wake up in a spooky ritual chamber aboard a ship. Emma is wearing a badass leather jacket, Farid has a bood stained ritual robe, and there’s a dead body on the floor. Tash speaks in a voice over.

Tash: You wake up on the observation deck of a ship, with no idea who you are or how you came to be here.

Emma: Oooh, some kind of spooky ritual, I like it.

At the table, Farid looks at his blank character sheet.

Faird: I think there’s been a mistake, our sheets are blank.

Tash: That’s right. You don’t know who you are or what you can do.

Farid: Then how do I know how many dice to roll?

Tash: Try to do something and I’ll tell you.

In the game, Emma waves her hands trying to summon magic, while tatoo covered Farid gives her a look.

Farid: Really? You think you’re the magic one?

Emma: WHERE ARE MY DICE!

Comments on A Voyage to Unknown Waters