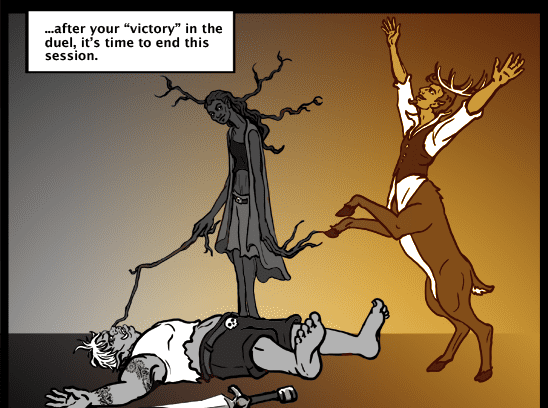 In the game, Farid prances in victory while Tash pokes the fallen ogre with a stick growing from her hand. Emma’s text appears in a voice over.

Emma: …after your “victory” in the duel, it’s time to end this session.

At the table, Farid is still celebrating. Tash looks at her character sheet.

Tash: I’ve finally got enough points to raise an attribute. But should I raise Resolve or Composure?

Emma looks in the book.

Emma: Let’s see. It says Resolve is “the focus and determination to see your character’s will done,” and Composure is “the capacity to remain calm and unfazed in social and threatening situations.”

Tash frowns at her character sheet.

Farid: And they’re both added together to make the Willpower stat.

Tash: But should I resolve to pick Composure, or compose a reason to pick Resolve?

Emma: I’m about to fail a Willpower roll and take your experience points away.

Comments on Resolved and Composed