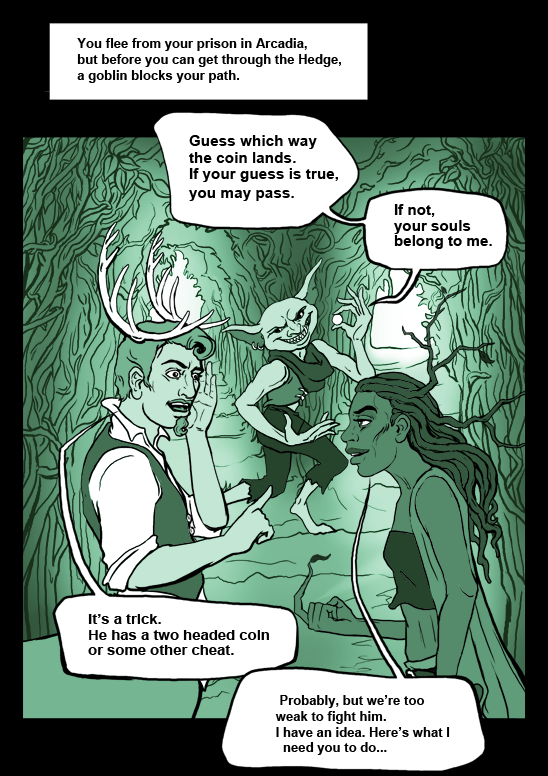 In the game, Tash and Farid stand at a forked path in the Hedge, thorns and vines growing all around. A goblin waits in front of them, flipping a coin in the air.

Emma: You flee from your prison in Arcadia, but before you can get through the Hedge, a goblin blocks your path.

Goblin: Guess which way the coin lands. If your guess is true, you may pass. If not, your souls belong to me.

Farid: It’s a trick. He has a two headed coin or some other cheat.

Tash leans over to tell Farid her plan.

Tash: Probably, but we’re too weak to fight him. I have an idea. Here’s what I need you to do…

Faird pulls a branch of the hedge back to munch on the leaves.

Tash: Alright, toss it. I’ll call in the air.

The goblin tosses the coin. Farid releases the branch, which strikes the coin from the air and down a path in the Hedge.

Farid: My bad, so clumsy.

The goblin chases after his coin.

Tash raises her hands, and branches of the Hedge grow to cover the path the goblin went down.

Emma: The goblin cannot get through the thorns. You’ve escaped, though that’s not the usual way to win a gamble with the Fae.

Farid: Is it too late for me to go after the goblin?