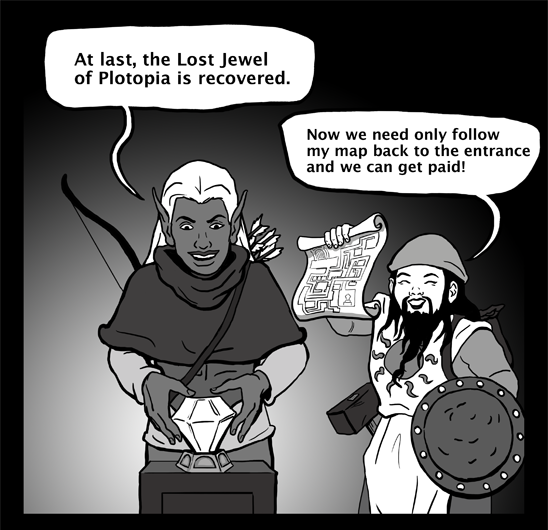 In the game, Tash and Emma are deep in a dungeon. Tash takes a fancy jewel off a stone altar, while Emma looks at her map.

Tash: At last, the Lost Jewel of Plotopia is recovered.

Emma: Now we need only follow my map back to the entrance, and we can get paid!

Emma and Tash stop as they see a group of bandits – way more than they can fight – camped in the room ahead of them. The bandits are playing cards, arm wrestling, sharpening weapons, and other bandity things. Emma looks at her map again.

Farid: Unfortunately, some of the local bandits have set up in the first chamber. There doesn’t seem to be a way around.

Emma: Just a minute. I rolled Cartographer to add the dungeon entrance to my map, remember? That’s past where the bandits are set up.

Tash: How does that help us? The bandits are still between us and the entrance.

At the table, Emma looks at the book.

Emma: The Cartographer skill says I can travel to any location on my map without making a roll.

Tash: I think that’s supposed to mean you don’t have to roll to find your way.

Emma: Probably, but it doesn’t specify. I vote that it be interpreted as teleportation.

In the game, Emma and Tash teleport to the dungeon’s exit, but find the bandits waiting for them.

Farid: Very well, you arrive without a hitch, but the rules don’t say anything about not needing to roll once you get there…

Comments on Here Be Adventurers