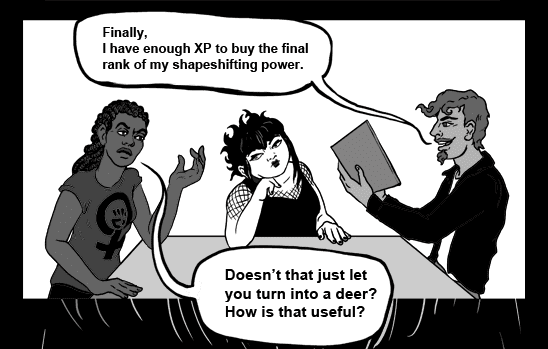 At the table, Farid is paging through the book.

Farid: Finally, I have enough XP to buy the final rank of my shapeshifting power.

Tash: Doesn’t that just let you turn into a deer? How is that useful?

Emma breaks in between them, fire in her eyes.

Emma: You are ambushed in your Freehold by fire spirits. Roll initiative!

In the game, fire spirits burst in through the Freehold’s window. They burn away Tash’s branches as she tries to fight them.

Tash: Damn, they just burn my powers away.

One of the fire spirits bites Farid’s sword, turning it red hot. He drops it.

Farid: And my sword is literally too hot to handle.

Tash: What do we do?

Farid:  I’ll have to buck the trend.

Farid transforms into a magnificent stag.

Farid defeats the fire spirits with his antlers, then prances on his hind legs.

Tash: But I must admit, the results are impressive.

Farid: The antlers aren’t just for show, you know.