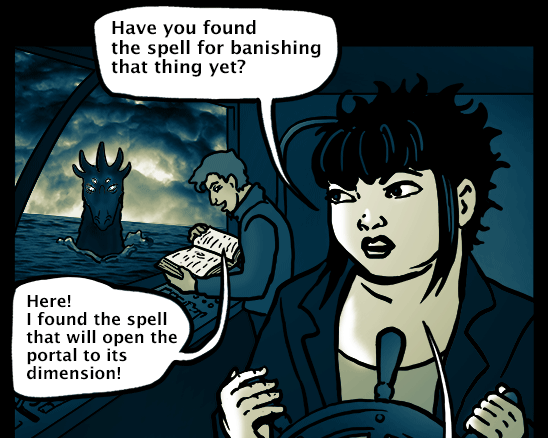 In the game, Emma and Faird are on the bridge. Emma is at the wheel while Farid looks through his spellbook. The ship is being pursued by a sea monster.

Emma: Have you found the spell for banishing that thing yet?

Farid: Here! I found the spell that will open the portal to its dimension!

Emma: Hurry up and cast it! It’s gaining on us.

The portal opens, but the monster doesn’t go through it.

Emma: Why isn’t it going through?

Farid: I guess the spell just opens the portal…

Emma turns the ship around and rams the monster back through its portal.

At the table, Tash congratulates her players.

Tash: Congratulations, you have finished The Voyage and recovered your memories.

Emma: Be honest, is that how the scenario actually ends?

Tash: I may have changed things a little.

This final comic brings Role Dice Already to an end. Thank you for going on this adventure with us.

Comments on The Final Voyage