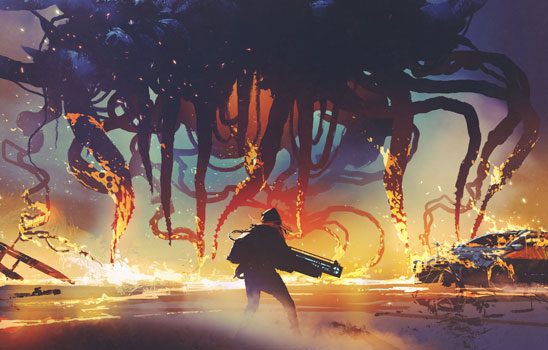 One of the phrases that’s been popularized in online storytelling discussions in recent years is the “sexy lamp test.”* This test is applied to a female character to judge whether the storyteller has given her an adequate presence in the story. A character fails the sexy lamp test if she can be replaced with a sexy lamp and nothing in the story would change.

The sexy lamp test is a check for character agency. Character agency is critical to audience satisfaction, and neglecting it is one of the most common mistakes in stories. I first mentioned the concept six years ago, and now I’m back to give it the dedicated and updated examination it deserves.

What Exactly Is Character Agency?

In short, a character has agency if they make choices that change the outcome of events. What does and doesn’t count can get a little confusing, so let me clarify for you.

On the other hand, a character who is threatened but chooses between two meaningful options – like flee or fight – has agency. That is, assuming those choices matter. If it feels like the monster would have killed them regardless of whether they chose to flee or fight, they have no agency. For a character who’s been eaten to have agency, the audience must get the impression that they were eaten because they either made an error in judgment or chose to risk their life to protect something else.

Agency is different from whether a character is reactive or proactive. A character who is hunted by a monster and must choose what to do about it is reactive, but they still have agency. If you are writing a thriller or horror, your protagonist may be reacting to threats for most of the story, but that doesn’t mean you shouldn’t have character agency in those scenes.

Baked into the psychology behind every story is the need to watch characters face problems and either succeed or fail based on whether they take the right actions or make the right choices. When characters succeed without making the right choice, it feels like they just got lucky and don’t deserve their success. Similarly, it doesn’t feel right if terrible things happen to a character when there’s no way they could have avoided it.

So foremost, the main character must have agency when facing problems, or the resolution for that problem won’t be satisfying to the audience. Does the main character need agency in every single scene? Not quite. It’s okay to open your story with your character being whisked away to a strange world against their will, and there may be other infrequent times when you can forgo agency to establish a problem or raise tension. But generally, a main character should have agency all the time.

What about the other characters? For the most part, yes, they should also have agency. That’s what characters are for; their job is to be the actors that drive the story. People without agency feel more like objects than characters – hence the sexy lamp test. If you need some people in the background just to kill off or you have a baby around to be a damsel, then they may not have agency in that case. Generally, people without agency are pretty minor characters, which is why using the sexy lamp test is an appropriate way to judge the significance of a character’s presence.

How Agency Is Neglected in Stories

While neglecting agency for side characters will make them feel superfluous or useless, a protagonist who lacks agency is even worse. Unfortunately, this is surprisingly common. Generally, the issue comes in two forms.

A Female Protagonist Is Directed by the People Around Her

The sexy lamp test is primarily about female characters for a good reason. Storytellers are much more likely to remove agency from women than men. This probably stems not just from plain old sexism but also from specific gender stereotypes.

In general, men who depend on other people are looked down on. They are often expected to come up with solutions and solve problems by themselves – even when they are not qualified to do so or they could use help. This real-world expectation is bad, but it’s helpful in storytelling because protagonists need to be the ones solving problems.

On the other hand, women are expected to listen to others and collaborate rather than solve problems independently. That means as soon as the storyteller isn’t sure how to get their female protagonist where they need her to be, they react by making a more knowledgeable character tell her what to do. This isn’t the right answer, but it doesn’t feel wrong to storytellers like it would for a male character.

This same thing can happen with child characters. Children have fewer skills, and realistically, adults should solve their problems for them. This can lead to stories where child protagonists are along for the ride instead of being heroes.

If your protagonist is a child, you’ll need to work on getting all of the adults out of the way. For a woman protagonist, it often helps to make her more proactive. If she doesn’t have the information she needs to solve the problem, what steps can she take to get it? Give her goals that she actively pursues. You may also need to remove the characters who are telling her what to do or make those characters as powerless as she is.

It’s okay for someone badass to help your protagonist in a big fight, but the protagonist must make a significant difference. If they aren’t strong, make them clever. Maybe they identify a weakness in the enemy or talk their way out of it.

The Storyteller Doesn’t Want the Problem to Be Solved

Sometimes the storyteller wants a problem to last for a while, but they don’t know how to properly plot that out. So instead, they make their protagonist do things that make no difference or just do nothing at all. Often, the narrator will repeat over and over again how the problem is just impossible to solve. (It is never impossible to solve.)

Take these examples in popular fiction:

On top of the dissatisfaction of watching a protagonist do nothing, problems that drag on without progress become boring or frustrating to audiences. So if you have an issue like this, it’s important to come up with forward steps your protagonist can make. They don’t have to solve the whole problem to give the character agency and the story momentum.

Once the protagonist makes some progress, restore the story’s tension by having something else go wrong, raising more questions, or tightening the deadline for solving the problem.

Agency makes characters feel a little larger than life. While our actions don’t always matter in the real world, they do in our stories. By watching the impact of character actions, we know whether that character is a hero or a villain.

Elsewhere, we’ve also called it a “fancy snow globe” rather than sexy lamp, to refer to characters in general instead of just women.