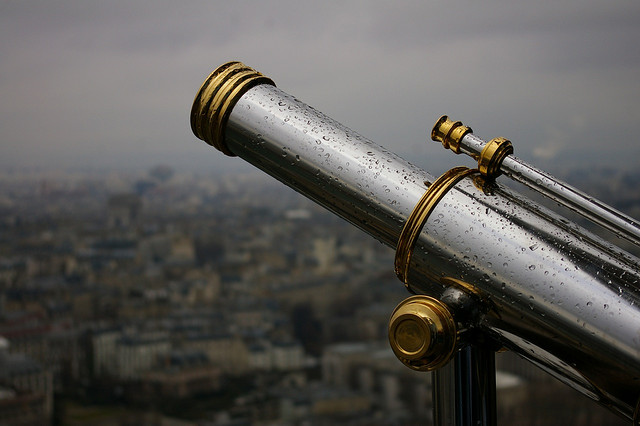 Vast literary realms are afflicted by a writing perspective with dull personality and chafing restraints. This perspective is called distant limited, and it is pervasive because it goes unexamined by many writers. Once you recognize this malady, you can choose the writing style your work deserves.

What Distant Limited Is

For an example of what distant limited looks like, take an excerpt from Wizard’s First Rule by Terry Goodkind. I’ll be critiquing the whole first chapter next week, but here’s a small portion. In this scene, Richard battles a vine:

One of the pods struck out and hit the back of his left hand, causing him to jump back in pain and surprise. Inspecting the small wound, he found something like a thorn embedded in the meat of the gash. The matter was decided. That vine was trouble. He reached for his knife to dig out the thorn, but it wasn’t there. At first surprised, he realized why and reprimanded himself for allowing his depression to cause him to forget something as basic as taking his knife with him into the woods.

You can tell this is distant limited because it has all of these characteristics:

If you are writing this way because it’s the best fit for your work, I declare you free of the curse. But most people don’t write this way on purpose; this is just the way they write instinctively.

Why is distant limited bad? It wouldn’t be, except the alternatives are clearly better. Let’s look at those alternatives.

Here’s that same passage, but I’ve rewritten it in omniscient perspective. Since I haven’t read past the first chapter of this book, I took liberties with the story.

One of the pods struck out and hit the back of Richard’s left hand, causing him to jump back in pain and surprise. He inspected the small wound and found what he thought was a thorn. Unfortunately, it wasn’t a thorn; it was a darkling seed. It searched for new life to spawn from, and it found his blood tantalizing. But Richard had never heard of carnivorous seeds, so he merely thought the vine was troublesome. He reached for his knife to dig out the thorn, but his scabbard was empty. His memory had been ravaged by depression, causing him to forget something as basic as his knife. While he was distracted by this realization, the seed burrowed out of reach.

You can tell this is omniscient perspective because “it was a darkling seed” is not something that Richard knows. The narration isn’t sticking to his thoughts anymore. While he is wondering about his knife, we know the seed is digging farther in.

Omniscient perspective knows no bounds. The narration is not hitched to the the protagonists. Unfortunately, this means readers won’t get to know the viewpoint character so intimately. The narrator can always describe characters and tell readers what they’re thinking, but that’s like using a hammer instead of a scalpel. The audience won’t hear the character’s voice throughout the story, and some opportunities for subtle character depiction will be lost. Because the readers will feel more distant from the character, the story may feel less tense, and they may not get as attached to the hero.

On the plus side, omniscient perspective allows the writer to use whatever narrative personality they want, not just the personality of the viewpoint character. They’re also free to discuss whatever they want, regardless of when or where the story is or whom the story is with. The writer doesn’t need to wait until a character sees something to tell readers about it. That’s especially handy when readers need to understand the complex world the writer has invented. If some figment of the world is tangential but especially entertaining, the omniscient narrator can easily include it. Of course, with great power comes great responsibility. Writers using omniscient perspective must prioritize information well, or they’ll bog down the story with too much explanation.

One more time with our example passage, but now it’s in close limited rather than distant limited perspective.

One of the pods struck out and hit the back of his left hand, causing him to jump back in surprise. His new wound was small but painful; a thorn was embedded in the meat of the gash. Whatever that vine was, it meant trouble. He’d better dig the thorn out. He reached for his knife, but it wasn’t there. Where had it gone? He sighed; it was at home. He’d given his depression free rein, and now he’d forgotten something as basic as his knife.

Now we’re seeing the story through Richard’s head. The narration and his thoughts are inseparable, giving us an experience that’s closer to the character’s. We don’t watch Richard finding a thorn; we find it with him. Instead of being told that Richard realized he forget his knife and that he reprimands himself, we see it directly in the narration.

When done well, close limited narration is in the viewpoint character’s voice. There is no gap between the viewpoint character’s biased thoughts and the narration. This provides an intimate experience that helps readers become attached to the protagonist. They will always understand the hero’s motivation, making the character more relatable and likable. By wielding the hero’s perspective, the writer can communicate how the character is feeling with subtle flavor in the narration.

But they can’t leave the character’s perspective without switching to another viewpoint character. If a deadly plague has just infected its first victim but none of the characters know that, the writer can’t tell readers about it. Explaining the world is tricky, and describing the appearance of the viewpoint character is even trickier. When done wrong, character dialogue or thoughts will feel unnatural because the writer wants the reader to know something that the characters have no reason to talk or think about.

Why Distant Limited Is Worse Than Either

Distant limited sticks to the perspective of the main character, but it does so in a remote manner. It doesn’t provide the character intimacy of close limited or the powerful flexibility of omniscient. In other words, it has all of the weaknesses of omniscient and close, but none of the strengths.

Distant limited narration feels neutral rather than flavorful. That means the prose is duller than it would be otherwise. Admittedly, that disadvantage varies depending on the strengths of the writer. Neither close nor omniscient will magically bestow prose with flavor—the writer has to work at it. But close and omniscient both encourage personality in the narration. Close does it by getting the writer in the head of the character; omniscient does it by giving the writer freedom. While it’s not impossible to give distant limited flavor, it doesn’t offer any support.

It might have a little more flexibility than close limited, enough that a skilled writer could put it to good use in the right situation. But in many cases, that flexibility is enough to encourage writers to fudge the viewpoint, while not enough to let them do so gracefully. Writers using distant narration are prone to jumping from one character’s viewpoint to another’s without warning, stuffing in exposition that clearly doesn’t belong, and inserting bits of omniscient whenever limited becomes inconvenient. Storytellers using close limited don’t try those stunts as often, because they know they can’t get away with it.

More than anything, advanced writers can use distant limited to assist with a tricky transition between different perspectives. It can provide a bridge between close and omniscient, or it can soften a change from one viewpoint character to another without interrupting the scene. In these cases, distant limited should only be used for a couple of paragraphs. But more often than not, it isn’t used for transitioning. Instead, entire books are written in the perspective equivalent of limbo.

If you want to write in close limited, slip into the shoes of your character. Describe the world as they see it, biases and all. The entire narration should be your character’s thoughts and experiences; if you feel the need to label thoughts or set them off with italics, you’re probably in distant. Look out for sensory verbs such as “saw,” “heard,” or “smelled” and thought or feeling verbs like “wondered,” “realized,” or “decided.”

If you want to write in omniscient, imagine you’re at a fireside with an audience. They love this story, and they like to ask questions about the places and character as you go. You’ll pause to fill them in when it’s convenient, but since you’re the greatest storyteller in the land, you don’t want to interrupt a tense moment or bore them with mundane details. When it feels like your character has to think about something before you explain it, you’ve probably slipped into limited perspective. Break yourself free. And remember: your fireside pals could pick up their phones at any minute. Stay entertaining!

It will take some time before writing in omniscient or close perspective comes naturally, but if you correct yourself enough times, you’ll stop writing in distant limited when you don’t mean to.

Once you master perspective in your narration, you can do wonderful things with it. Narrating delightful world description followed by intimate character feelings? Sure. Hopping from head to head in the same scene? It can be done! Watching a character objectively or living their madness? Why not both? But first, take control of your prose. Understand what perspective you’re writing and why. Once you’ve conquered all the techniques, you can experiment or even cheat.

Comments on Breaking the Curse of Distant Perspective