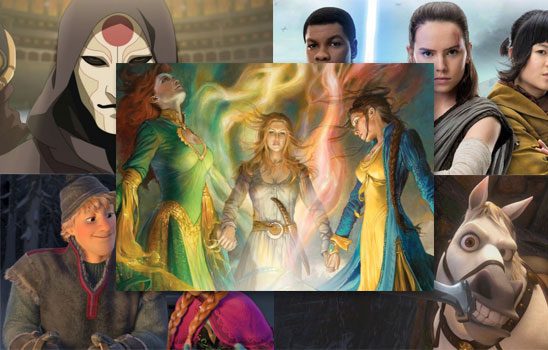 We’ve had a great year at Mythcreants. We celebrated our fifth year online, started posting Q&As on the site, passed our 200th episode of the podcast, and released a new game! It can be hard to keep up with all the content we produce in a year, so here are the highlights.

Storytellers love character archetypes. They feel ancient and symbolic, and they’re just fun to play with. A while back, we mentioned archetypes we think stories are better without. To banish the rain on our archetype parade, here’s five we want to see more often. Read more »

Of all the characters in a story, how do creators choose which one is the main one? This question comes up often in writing workshops. Sometimes writers switch around which character is in focus in order to determine who should be framed as the main … read more »

Why “Historical Accuracy” Isn’t a Reason to Exclude Diversity

Whenever an argument starts about some big-name show lacking diversity or having too much bigotry, you can be sure to hear the refrain that it’s all in service of historical accuracy. It might not be pleasant, the argument goes, or agree with modern sensibilities, but … read more »

A favorite pastime of internet nerds is to put the new Star Wars films under a microscope and ask questions about anything doesn’t make sense. We ask how the First Order became so powerful after the Empire’s fall, how Maz got a hold of Luke’s … read more »

A great reveal can be sublime. Unfortunately, this has storytellers chasing after the perfect reveal even when their story would be better off without it. Reveals have to be set up just right to work, and some information is too critical to be withheld until … read more »

Storytellers setting out to create a love story face many obstacles, and one of the more serious obstacles is an underdeveloped love interest. This is what you get when the protagonist’s sweetheart doesn’t seem like a complete character in their own right. They might just … read more »

When done well, romance not only makes stories feel deeper and more meaningful but also gives the audience another reason to turn the page. Unfortunately, it’s easy to jump into writing a romance without thinking it through. And if the romance isn’t setup well, it … read more »

I’ll admit it: my title is pretty sensationalist. But I can’t bring enough attention to this issue. When we’re hired to do content editing, 95% of the manuscripts we look at need significant work in this area. Before we look at their work, most writers have … read more »

Where does Evocation end and Abjuration begin? Should a fireball require Prime magic? What even are Charms? This week we’re talking about how different settings classify magic, from novels to RPGs to video games. We discuss the purpose behind dividing magic … Read more »

Why You Shouldn’t Use the Term Mary Sue

The tale of a term that’s gotten out of hand. Read more »

Where Should I Start My Story?

My main characters are part of secret government unit that goes after supernatural threats. Should I start the story with the new members in training? Or should I start with them being assigned to the unit and have flashbacks to show how they’ve become friends, etc.? Read more »

Thanks for being a part of our year!