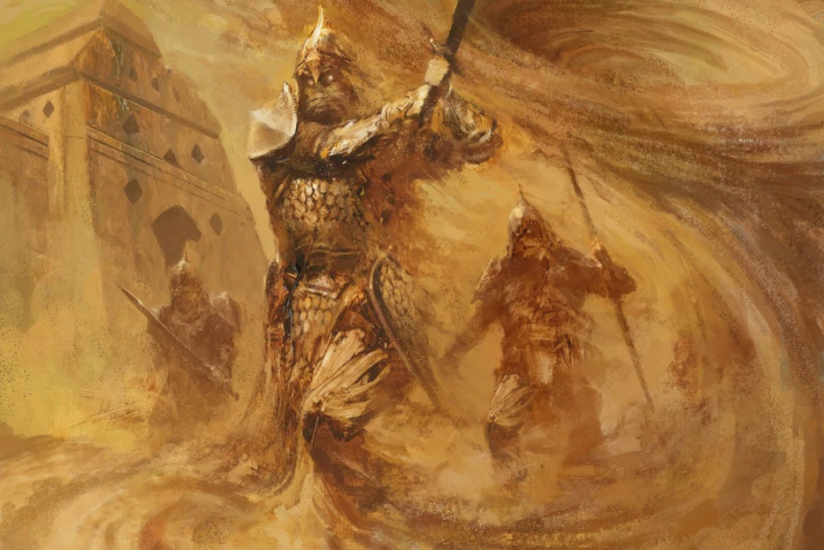 Rally the Ancestors by Nils Hamm

Ancestry is one of the fundamental choices a player must make when building a character. Whichever option they choose helps determine attribute distribution, proficiencies, movement types, or even feats. Ancestries have also undergone a design shift in recent years, becoming less restrictive and, on average, more powerful. With a new round of reworks coming in, sigh, Mordenkainen Presents: Monsters of the Multiverse,* I wanted to take a look at all the ancestries currently on offer and, as I so often do, rank them.

Unfortunately, there are over 100 ancestries currently in the game, making a comprehensive ranking unfeasible. Instead, I have combed through every ancestry and selected the top 10 contenders. As for the rest, I will cover them as a singular entry.

Finally, a note on attributes: as of Tasha’s Cauldron of Everything, all ancestries can switch their attribute bonuses around however they like. It’s technically an optional rule, but in the same way feats and multiclassing are “optional,”* so I’m assuming that the GM allows it for this ranking. If your GM doesn’t allow that rule, then ancestries with preexisting flexible bonuses will be comparatively more powerful.

It’s important to note that an ancestry being present in this collection does not necessarily indicate that it is weak. Some quite good ancestries didn’t make the top 10 simply because there was another ancestry that had the same strengths while being more powerful. For example, the satyrs are good due to its Magic Resistance. However, yuan-ti have the same feature and better secondary bonuses, meaning the satyr are consigned to the reject bin.

As for weak ancestries, there are plenty to be found here. Ancestries can be a major source of power, rivaling even what a class grants, especially at low levels. If you are looking to optimize, you can’t settle for an ancestry that does little more than the base attributes. That doesn’t mean these ancestries are unplayable; 5E does a good job of making sure even the worst options are at least functional, but they will result in a much weaker character.

Speed: 25 ft. Your speed is not reduced by wearing heavy armor.

Dwarven Combat Training. You have proficiency with the battleaxe, handaxe, light hammer, and warhammer.

Tool Proficiency. You gain proficiency with the artisan’s tools of your choice: Smith’s tools, brewer’s supplies, or mason’s tools.

Stonecunning. Whenever you make an Intelligence (History) check related to the origin of stonework, you are considered proficient in the History skill and add double your proficiency bonus to the check, instead of your normal proficiency bonus.

Languages. You can speak, read, and write Common and Dwarvish. Dwarvish is full of hard consonants and guttural sounds, and those characteristics spill over into whatever other language a dwarf might speak.

Dwarven Armor Training. You have proficiency with light and medium armor.

Mountain dwarves are excellent for builds that don’t need a feat and are multiple attribute dependent (MAD). This is due to the ancestry’s unique +2 to two different attributes.* Classes like the ranger and the monk come to mind as good candidates, since they are the MAD-est of the classes. The Bladesinger is another subclass that needs a bunch of attributes. Starting with twin 17s in your main attributes allows you to raise both to 18 either via half feats or the rare split +1 ASI.

This ancestry has some solid secondary bonuses as well. Resistance against poison damage is very good, especially at lower levels where you’ll be fighting poison beasts. Mountain dwarves also stand out as the only ancestry that gains armor proficiencies. This feature is hurt by the lack of a shield proficiency, but a wizard that can wear half plate without feats or multiclassing is nice to have. The stout mountaineer takes 10th place.

Constructed Resilience. You were created to have remarkable fortitude, represented by the following benefits:

Sentry’s Rest. When you take a long rest, you must spend at least six hours in an inactive, motionless state, rather than sleeping. In this state, you appear inert, but it doesn’t render you unconscious, and you can see and hear as normal.

Integrated Protection. Your body has built-in defensive layers, which can be enhanced with armor:

Languages. You can speak, read, and write Common and one other language of your choice.

Warforged are another great one-size-fits-all ancestry because everyone likes armor class (AC). A flat +1 to a character’s AC is very powerful, especially when the character already has strong defenses. A warforged Forge cleric can start at 1st level with a whopping 20 AC, going up to 22 with full plate armor. This is the most extreme example, but any character that expects to take hits can make use of this excellent feature.

As for secondary bonuses, the warforged shares some similarities with the mountain dwarf, namely poison resistance. This is good for all the reasons I’ve already mentioned, allowing the warforged to be very tough to hurt at lower levels of play. Other than this defensive suite, there isn’t much to recommend the warforged, but those defenses are enough to secure 9th place.

Lucky. When you roll a 1 on an attack roll, ability check, or saving throw, you can reroll the die and must use the new roll.

Brave. You have advantage on saving throws against being frightened.

Halfling Nimbleness. You can move through the space of any creature that is of a size larger than yours.

Languages. You can speak, read, and write Common and Halfling. The Halfling language isn’t secret, but halflings are loath to share it with others. They write very little, so they don’t have a rich body of literature. Their oral tradition, however, is very strong. Almost all halflings speak Common to converse with the people in whose lands they dwell or through which they are traveling.

Naturally Stealthy. You can attempt to hide even when you are obscured only by a creature that is at least one size larger than you.

The lightfoot halfling secured its spot on this list due to its being the premier ancestry for ranged rogues. This is thanks entirely to the Naturally Stealthy feature it gains. Rogues are always looking for ways to gain advantage on their one powerful attack while avoiding damage, and being hidden the entire fight is a great way to do both of those things. Naturally Stealthy ensures that the rogue is always able to hide, either behind their own party or enemies.

As good as this ancestry is for rogues, it’s not bad for other builds either. Any dexterity-based build can make use of Naturally Stealthy, although the action cost for non-rogues is very steep. Brave gives you advantage against quite a few debilitating effects, and who doesn’t love rerolling ones with Lucky? This nimble ancestry sneaks into 8th place.

Fey Ancestry. You have advantage on saving throws you make to avoid or end the charmed condition on yourself.

Fury of the Small. When you damage a creature with an attack or a spell and the creature’s size is larger than yours, you can cause the attack or spell to deal extra damage to the creature. The extra damage equals your proficiency bonus.

You can use this trait a number of times equal to your proficiency bonus, regaining all expended uses when you finish a long rest, and you can use it no more than once per turn.

Nimble Escape. You can take the Disengage or Hide action as a bonus action on each of your turns.

Continuing the diminutive domination of this list, we have the goblin. Where the lightfoot halfling was at its best with rogue, goblins want to avoid the class at all costs. This is because the goblin’s best feature, Nimble Escape, is made completely redundant by the rogue’s Cunning Action. Any other class benefits greatly from Nimble Escape, especially those that don’t always have something to do with their bonus action and/or want the ability to flee combat safely.

For example, a goblin wizard can use its action to cast a powerful spell, then as a bonus action either try to hide or disengage to escape possible retaliation. Besides Nimble Escape, goblins get advantage against charm effects and a small damage boost from Fury of the Small. These are much more minor effects, but together they add up to a solid 7th place.

Fey Ancestry. You have advantage on saving throws against being charmed, and magic can’t put you to sleep.

Languages. You can speak, read, and write Common, Elvish, and one extra language of your choice.

From the horde of half elves, we have the drow descent. Where the mountain dwarf was unique for its two +2 attribute distribution, the half elf gets one +2 and two +1s to distribute how you see fit. This is very good for builds looking to multiclass, as securing the 13-attribute requirement can be achieved much more easily with the two +1s. Half elves also have access to the Elven Accuracy feat, one of the best half feats in the game.

The reason I picked drow descent is due to the powerful Drow Magic feature. Faerie Fire and Darkness are both excellent spells, especially for builds that look to use Darkness for one-sided obscurement strategies. One such example is the paladin/warlock multiclass build: the hexadin. Paladins don’t have many spell slots to work with, so two good spells you can cast for free is a great boon for the build. 6th place to this broody ancestry.

That wraps up the first half of this list; tune in next time, when I cover the top five ancestries.

I’m sure there are more awkward names to fit into an article, but 5E is gunning for the top spot.
Also, all rules are optional in RPGs.
Thanks, Tasha’s!

Comments on The Best Ancestries in D&D 5E, Part 1