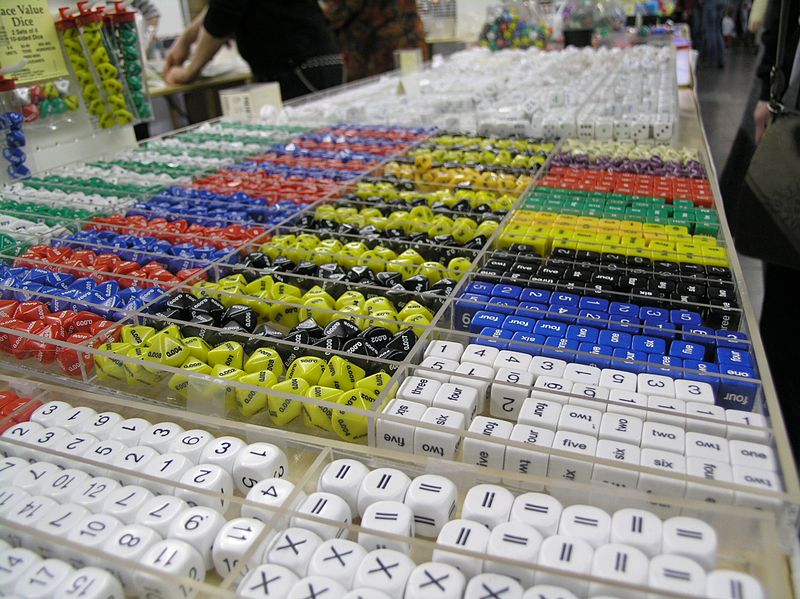 Dice have been an integral part of tabletop roleplaying games since the beginning. After all, how else can someone know if their black arrow will hit the dragon in his secret weak spot, or if it will miss terribly and then said dragon will eat their face?

In short, dice are used as random number generators when the outcome of an action is in question. They are what separates tabletop roleplay from improv exercises. Occasionally a game will use playing cards or some other device to generate random numbers, but usually it comes down to dice.

In general, there are two basic kinds of dice rolling systems used by most roleplaying games out there. I call the first a static die system. In a static die system, the same die or dice are used for most rolls, with a flat bonus or penalty being applied to the result. Dungeons and Dragons uses a d20 for almost everything outside of damage rolls.

The second is called a dice pool system. With die pools, the number of dice rolled is determined by the stats of the character making the roll. There are many different schemes for determining how the stats correlate to the dice. Within dice pool systems, there are two basic varieties: additive based and success based. In an additive based system, the dice are rolled, and then the results are all added together. The result is then compared to a target number. The D6 System by West End Games uses this method, as does Legend of the Five Rings by AEG. In a success based system, each die that rolls at or over a certain value is counted as a success, and each that rolls below that value are counted as failures. In general, a certain number of successes are needed to accomplish a given task. Burning Wheel and Storytelling System are both success based systems.

Both subtypes have their own advantages and disadvantages, mainly in what kind of math a group prefers. Additive based systems offer a wider range of numbers, and as such a greater degree of control when assigning bonuses and penalties. On the other hand, success based systems tend to be much quicker to resolve and require less number crunching, especially at high levels when the players are rolling handfuls of dice.

The Advantages of Dice Pools

The dice pool offers a number of advantages as a core mechanic, and to discuss them I am going to get a bit mathy, so consider yourself warned. The biggest and most immediate advantage is that die pools create a bell curve. That is, the average roll from a number of dice is going to be the most likely, with the extreme high and low numbers being the least likely. For example, the most common numbers to come up on a roll of 5d6 are 17 or 18. The least common are 5 and 30. This means that while flukes do happen, they are appropriately rare. In a static die system, such flukes are much more common. Using a single d20 means that a 1 is just as likely as a 20, or any number in between. The practical effect of this is that in a dice pool system, characters are less likely to flub a roll they should be able to pass, or succeed a roll that should be far beyond them.

Dice pool systems are not without their drawbacks, however. The first is how many dice it takes to play them. While it can be fun to simply pour the contents of one’s dice bag onto the table, groups sometimes find themselves with an insufficient amount of numbered polyhedrons to play a game properly. This can be especially bad if the game calls for less common types of dice, like the much maligned d12. Heaven help the group that searches for a handful of d12s.

The other main problems are math related. Some additive based systems ask the players to do a lot of number crunching, which can become a drag when they are rolling for what is supposed to be fast paced combat. It’s also more difficult to calculate the likelihood of success or failure in dice pool systems than in their static counterparts, which could be annoying for some players.

When choosing what kind of dice system to use, it is important to consider the type of game one is trying to achieve. Dice pool systems are a good fit for more realistic and narrative driven games, because characters in such systems behave more like real people. Static die systems may work better if the group wants a game where they can better calculate the odds, doesn’t have mountains of dice to draw on, or if they just long for the thrill of a natural 20. The choice between additive and success based systems should also be based on your game goals. The former allows for more mathematical flexibility, giving players a much higher degree of control, while the latter involves far less number crunching, useful for player groups which like to focus on quick, emotive conflicts. This decision should involve the entire group if possible, so everyone can have fun, which is the ultimate goal of every roleplaying game.

More in Legend of the Five Rings

Five Tips for Running a Campaign in an Established Setting

Comments on Advantages and Disadvantages of Dice Pool Systems